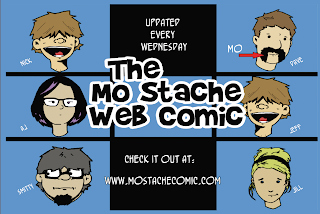 With CBR and Secret Identity, I've talked about what I've been doing for the past couple years. Today's subject, Mo Stache, is also something I've been working on for a couple years, but it's just starting to see the light of day.


Mo Stache is a webcomic that my good friend John Cordis and I launched on September 1, 2010. We have been working on it in spurts since 2008, and it's great to finally see it come to life.

Mo Stache is a story about a man named Dave Reynolds, and a mustache named Mo.  As the story opens, Dave is leading a pretty normal and boring twenty-something life. All that changes when he wakes up one morning to find he's grown (or so he thinks) a big, bushy mustache overnight. Things take a further turn for the weird when that mustache starts talking to him.

I don't want to spoil too much else right now, but you can see a new page of Mo every week at www.mostachecomic.com. John and I will also be posting some behind the scenes stuff, like scripts, sketches and the like. The picture to your right is the postcard we'll be handing out at this year's New York Comic Con.
Posted by See Brian Write at 10:22 AM