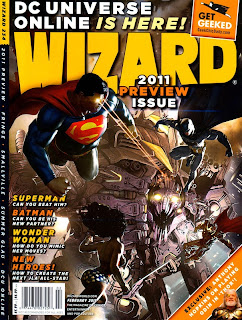 Big news in the comic world this week, as word came down Monday that Wizard magazine (and Tor Fair as well) would be ceasing publication. The company itself (Wizard World Inc.) has gone public, and in addition to producing comic and pop culture conventions, it will launch a new online publication in February called "Wizard World."

I'm not sure how most Secret Identity listeners feel about the news, but I find it disappointing anytime a print publication goes away. That said, Wizard has pretty much been the "Maxim" of comic journalism for the past several years, and its readership had declined drastically from it's heyday as the premiere source of comic news.

Like a lot of print publications, Wizard struggled to stay relevant in the age of 24-hour news sites, and with CBR, Newsarama and even IGN producing regular features, creator interviews and exclusive reveals, Wizard's "Top Ten Caped Hotties" lists were just not cutting it anymore.

What I find more interesting than the ending of the print magazine, is the potential directions Wizard could go with their online "Wizard World" publication. If they are going to use a subscrition model (which I suspect they will), I'd love to see them go the route of Electronic Gaming Monthly. While EGM does still have a print version, their online magazine is excellent, and features a nice blend of paid and free content. More importantly, there is a focus on features--not news-chasing, superficial soundbytes featuring the same assets that are sent out with press releases to every news site on the web. For my tastes, it's what separates EGM from everyone else. (You can check out the latest issue of EGM over at www.egmnow.com).

With its 12 planned conventions next year, there's also a lot of creators that Wizard will have access to, which they could leverage for their online publication. Video interviews, behind the scenes features, studio and set visits--there are a ton of possibilities. They could also offer content packages for each of their conventions. For example, those who attend a Wizard World show could receive a code to download content that was recorded during the convention. Those that don't attend could pruchase a 'virtual pass,' where they could view interviews, see a video tour of the show floor, and participate in online interviews with some of the creators at the show.

Whatever happens over the next few months, it should be interesting to watch. Here's hoping that Wizard succeeds in restoring some of the good name they had for so many years.
Posted by See Brian Write at 10:05 PM