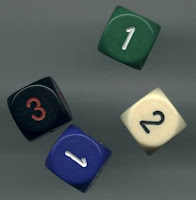 As I mentioned a couple weeks ago, I'm working on designing a pen-and-paper roleplaying game. While I've kicked around a bunch of ideas over the past year or so, I am moving full steam ahead with the project now. What's both great and challenging about RPGs is they run the gamut from simple storytelling systems with almost no mechanics, to math-intensive, stat-saturated systems where every possible action has a number attached to it.

For the RPG I'm creating, I am using the KISS approach as my overriding theme: Keep It Simple, Stupid. This RPG is aimed at comic fans who may not have grown up playing D&D like I did, and may not be familiar with roleplaying games at all. So, I need something that has a few core mechanics that are simple to understand and can be learned quickly.

Taking a bit of inspiration from the great FUDGE RPG, as well as the original D&D, I have come up with a core mechanic that I think is simple but effective. Over the next few months, I'll be talking about the core mechanic, as well as the other pieces of the game that are coming together right now. For today though, I'll reveal this tidbit: the system will be D6-based. That means it will use six-sided dice to resolve actions in the game.

This was a tough decision, because six-sided dice are not as cool or flashy as their 10, 12 and 20-sided brethren. However, they are more accessible to the average person, and they can be found everywhere. In the interest of keeping my RPG simple and accessible, I felt that having it be D6-based was the way to go.

In the next installment of Adventures in RPG design, I'll get into the core mechanic I mentioned earlier.
Posted by See Brian Write at 8:51 AM