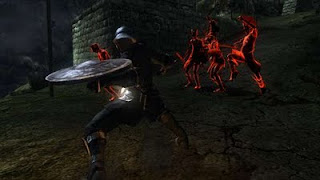 While there are several factors that make "Demon's Souls" stand out from other RPGs, perhaps the most unique aspect of “Demon’s Souls” is the way the game approaches multiplayer. From the moment you start the game, you are online. As soon as I began exploring the first area of the game, I noticed there were glowing markings scrawled on the ground in a lot of different places. Upon further inspection, I learned that these markings are actually messages that were left by other people who are playing “Demon’s Souls.” Sometimes the message was a warning about an enemy lurking around the corner. Sometimes it was a hint that treasure lies ahead. And sometimes it was a plea for help from someone who was in trouble in their game. So the first layer of multiplayer in “Demon’s Souls” is the idea that you can leave messages for others, and they can leave them for you. Even better, you can rate other people’s messages, and a good rating actually helps heal that player in their own game. So that player looking for a little help? I might have saved his or her life by giving their message a good rating. You do have to exercise some caution however, as players can leave misleading messages, but almost all of the messages I’ve encountered have proven to be accurate.

Another layer of the multiplayer in “Demon’s Souls” is the ghostly visions of other players that populate your game. At any time, you’ll see an apparition of another player run around a corner and engage in battle with unseen enemies. You are literally seeing what’s happening in their game right at that moment. You’ll also see the ground littered with bloodstains throughout the game world. Examining a bloodstain shows you a ghostly vision of how that player died in battle. Both the apparitions and the bloodstains can be extremely helpful, as you often can find out what’s waiting for you and what strategy did or didn’t work by watching what other players have done. The great thing is, you can also ignore these, and even the occasional apparition running by you is never too distracting or intrusive. I loved it, as I could imagine all of the other worlds where players were battling through the same scenarios, and I felt a kinship to them.

While the first couple layers of “Demon’s Souls’” multiplayer are somewhat passive, the last layer is much more aggressive. In simple terms, other players can enter your game under certain conditions, and they don’t need an invite from you.

On the one hand, there is an invite system where you can invite other players into your game, and they can help you battle both regular enemies and bosses. You must be in Body form (full health) to summon others into your game, and you use a particular artifact (Blue Eye Stone) to do so. These players are referred to as Blue Phantoms. They get to keep the souls they acquire while helping you, and if they defeat a boss with you, they get revived and go back to their own game world.

The flipside of the invite system is the invade system, and it’s devious, frustrating and amazing at the same time. It boils down to this: when you are at your strongest (Body from), and you are in a level you have not yet beaten, it is possible for other players to invade your game and try to kill you. Let me say that again--OTHER PLAYERS CAN ENTER YOUR GAME AND TRY TO KILL YOU. These players are referred to as Black Phantoms. I have had three experiences with this system during my time with “Demon’s Souls,” and each of them was one of the most thrilling experiences I’ve ever had in a game.

My first experience with a player-controlled Black Phantom caught me completely off guard. I had just defeated a boss, which means I revived from my Soul from into my Body form (i.e. I got all of my health back). I had just started running down a long bridge into the next area, when all of a sudden a message started flashing on my screen: “Player X has invaded.” My heart almost stopped. I had no idea what that even meant, until I saw it--off in the distance, charging toward me, was a ghostly visage of a well-armored night racing toward me, it’s form outlined in blood-red.

I immediately panicked and ran back to the beginning of the level, trying to use the transportation stone to teleport back the safe zone. The message I got in response was terrifying--”Can’t return to Nexus while in multiplayer.” I felt like I was in a “Friday the 13th” movie--I was locked in this level with a homicidal maniac, whose only goal was to hunt me down and kill me. Resigned to my fate, I took a deep breath and decided I was going to go down swinging. I armed myself with the most powerful spell I had at my disposal, and then stepped out of the room I had ran into, facing the charging Phantom. When he got close enough, I fired off a spell--and hit him. I quickly fired another, and hit him again. And then something magical happened--I became the hunter, and he became the prey. He was clearly not prepared for a magic battle, and so he turned to run away. I bolted after him, firing spell after spell as I chased him. He tried to put some cover between us, but my character was much faster, and after a few more blasts, his character keeled over and then faded away, sent back to his own world. It was amazing. I had honestly never had an experience like that in all of my years gaming.

The second time someone invaded my game, it didn’t go so well. I had just defeated a particularly difficult enemy, and he dropped one of the rarer items in the game. right before I went over to pick it up, I got a flashing message that someone had invaded my game. I panicked, left the rare item on the ground, and started looking around for my new enemy. I was up on a ledge and the invader ran up to the area below me. This guy (or gal) had clearly done this before, as he started his attack by casting an ‘acid cloud’ spell that immediately broke all of my weapons and armor, rendering them much less effective. We then played cat and mouse for a while, before he finally cornered me and ran me off the side of a cliff. When I respawned back at the Nexus (the safe zone), I had to pay about 3,000 souls to have my armor repaired. Worse still, when I went back into the world I had been in, the a rare item I forgot to grab was gone, never to show up again.

My last confrontation with another player happened in a really cool way. At the end of one particular level (The Tower of Latria), the boss you face does not fight you himself--he summons an actual player into the game to face you for him. As you make your way through the final part of the level, you know the other player is waiting for you. Again, this is one of those experiences I’ve never had in a game. The anticipation/anxiety was palpable as I made my way to the area where I was to face my opponent. I thought I had prepared well, taking my experience from the previous two online encounters into this battle. I was wrong. The player I faced was faster than me, and my spellcaster with ranged attacks was no match for his dual axe-weilding melee character. I gave a good fight, but ultimately lost. When I made my way back again for another fight, I faced an NPC controlled by the game, presumably because there was no one online to summon at that point. I beat my opponent and moved on.

I can’t say enough about how effectively “Demon’s Souls” implements the online portion of the game. While you can avoid being invaded by remaining in Soul form (but sacrificing some of your health), you have to face another person at least one time, and that’s a good thing, as it’s an experience that should not be missed.

In closing, over the course of my 58 hours with the game, I came to love “Demon’s Souls.” It’s a shame that many were turned off by it’s excruciating difficulty, as there are so many things the game does that you won’t find anywhere else. It’s truly an achievement to complete the game, and one I will remember for a long time. I began my second playthrough almost immediately, as the game lets you carry over all the levels and gear you’ve amassed the first time through. Of course, the enemies are substantially more difficult the second time around, but what else would you expect from this game?

So, are you up for the challenge? If so, you just might run into me sometime...
Posted by See Brian Write at 9:25 AM