Why Double Feature is a Digital Revolution 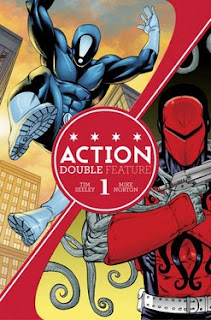 In April, the guys at Four Star Studios (who include Mike Norton and Tim Seeley) launched a brand new venture called DoubleFeature (www.doublefeaturecomics.com). The idea behind it is that each month they will put out a two-fer of creator-owned short stories for a mere $0.99. Issue #1 of DoubleFeature is entitled Action, and showcases Mike Norton's "The Answer" and Tim Seeley's "Jack Kraken." Both stories are fantastic and you will hear me review them on Issue #325 of Secret Identity. What really blew me away about Double Feature was how the iPad app really shows the potential of digital comics. Built into the app are a few simple but amazing features. First, there is a creator commentary that you can select, which offers notes on each page of each story by Seeley and Norton.

Second, and most awe-inspiring, is the option to see each page of each story in its penciled, inked and fully colored and lettered formats. Let me repeat that--YOU CAN TOGGLE BETWEEN THE PENCILED, INKED AND FULLY-COLORED AND LETTERED PAGES OF EACH STORY. You can do this on the fly, toggling back and forth as you read each page.

I'll let that sit in for a minute.

What these guys are doing cannot be done with print comics. Period. Sure, in some trade collections you might get sketches and some creator commentary, but not integrated like this. So much of the conversation about digital comics revolves around how they are inferior to print comics. People who think that way need to take a good look at what the Guys at Four Start Studios are doing with DoubleFeature. It is amazing and it deserves your support. I will be talking about this for a long time to come, and I look forward to reviewing each issue of DoubleFeature on Secret Identity. I am hopeful that other creators will be inspired to think differently about the power of digital comics as well. If the guys at Four Star decide to license their app as a platform, I would have Mo Stache on this thing tomorrow.

If you don't have an iPad, you can go to www.doublefeaturecomics.com right now and download the PDF version of DoubleFeature #1 right now. As with the iPad version, it will cost you a mere $0.99.  The second issue of DoubleFeature, entitled "Horror," just released last week.
Posted by See Brian Write at 9:43 AM