The Familiar Heartache of a Lifelong Sports Fan 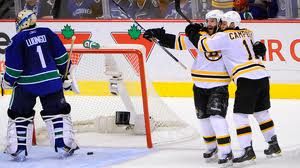 Last night, my beloved Vancouver Canucks lost Game 7 of the Stanley Cup Finals to the Boston Bruins. I've been a Canucks fan for over 20 years, and the last time they made the Finals was in 1994. They lost an epic 7-game series to the New York Rangers, in what I believe was the greatest series of all time. This year however, these Canucks lost in shame. They were shut out on their home ice, completing a series in which they really weren't in since the third game. It was painful to watch a team lose the last game of the Finals and not even put forth an effort. It was sad.

For me as a sports fan, it continued a lifelong streak: No professional sports team I root for has even won a championship. The San Diego Padres have been to the World Series twice since 1969, and lost both times. The San Diego Chargers went to the Super Bowl in 1994 and were crushed by Steve Young and the San Francisco 49ers. And I rooted for every team Charles Barkley played on during his NBA career, only to seem him retire without a championship. To top that off, I grew up a Hartford Whalers fan, a franchise that toiled in mediocrity until it left town in 1997, only to go on and become the Stanley Cup Champion Carolina Hurricanes.

I'm writing this as a form of therapy today, because last night's loss is so painful that I don't know if I can be a sports fan anymore. I realize that a couple weeks from now, I'll move on and focus on the rest of the baseball season (and my sub-.500 Padres), but right now it just hurts.

I root for a lot of underdog franchises, and I always have. With that comes a lot of losing. But every once in while, when one of those franchises gets a shot at a title, just once I'd like to see them get it.

It wasn't to be for the Canucks last night, and who knows how many years it will be before another shot comes along.
Posted by See Brian Write at 9:19 AM