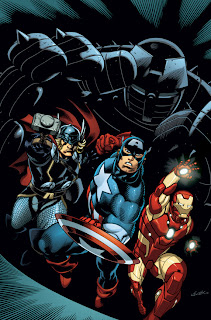 This week, Marvel announced their latest Comics for Comics initiative, which allows retailers to send in covers of unsold comics to Marvel in exchange for a rare variant cover edition of Fear Itself #6 that they can sell in their store. That may sound pretty cool on the surface, except it’s not unsold Marvel comics retailers are being asked to return--it’s unsold DC comics.
For every 50 covers of selected Flashpoint issues that retailers submit, they get an Ed McGuinnes variant cover issue of Fear Itself #6. So, Marvel is asking comic retailer to rip the covers off of 50 DC comics and send them in to get a free Marvel book.  Here’s what Marvel Senior VP of Publishing, Sales and Circulation says about the initiative:

“In these tough economic times, we feel it’s our duty to help. After the overwhelmingly positive response to our Comics For Comics programs, through which we received tens of thousands of covers, we’re excited to provide retailers with the chance to help their stores through selling an ultra-rate variant."

Personally, I think that’s a bunch of garbage. For some reason, Marvel thinks it’s cute to design incentive programs that are a direct attack on DC, and then coyly act like they are doing this to support retailers (they did a similar promotion with Blackest Night and Siege). No one falls for it, least of all retailers, and fans are getting sick of it too. This type of move just comes across as childish. Marvel is already the market leader in terms of comic sales, and these types of arrogant stunts will potentially have the exact opposite effect Marvel is hoping for. I’ve read a lot of forum posts this week about fans dropping Marvel books in the wake of this, and a lot of retailers are railing against it as well.

If Marvel wants to truly support retailers, they should use their own books in these incentive programs. How about for every 50 Fear Itself tie-in covers you send in, you get a free copy of a Daredevil #1 variant? Support the retailers that support you, don’t undermine them by having them take another company’s books off the shelves. Retailers need to sell those books to survive, and you’re forcing to take a gamble that your “ultra rare” variant will bring in more money than the comics they destroyed to get it.

I’m not sure Marvel is aware of this, but no retailer is going to survive in the comic market by selling only Marvel books. If DC disappeared tomorrow, Marvel would follow soon afterward. I would much rather see Marvel focusing on improving the quality of their books in order to justify the $4 price point, than taking shots at DC, who is actually making bold moves and shaking up the status quo (i.e. $2.99 comics, day-and-date digital and the upcoming relaunch).

I have been a lifelong Marvel fan, but in the past couple of years, I’ve felt like DC has gone about their business in a much more professional, fan-friendly way. Marvel spends too much time patting themselves on the back, and not enough time on making sure they are putting out a quality product. They should pay more attention to their own house, as they might not be number one for much longer. They certainly won’t be in the month of September, and fan backlash against Marvel could give DC the momentum it needs to keep the top for some time to come.
Posted by See Brian Write at 7:37 AM