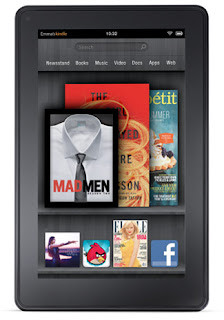 Before Amazon’s big announcement yesterday, I was expecting them to come out with a decent $250 Android tablet. Instead, they fired the first real shot across Apple’s bow since the so-called “Tablet Wars” began.

First, the details--Amazon’s upcoming Kindle Fire is a 7-inch tablet that will run a customized version of Android. The tablet will have Flash support (which the iPad does not), and will be connected to Amazon’s suite of services (Kindle, Cloud Music, Prime Streaming, etc.). The tablet will feature a 7.5-8-hour battery life, and will be able to sync wirelessly. The Fire will be wi-fi only (no 3G), and will not include a camera or a microphone.

The most important detail, however, is the price: $199. Or, in my opinion, the magic price point that will destroy pretty much every other 7-inch tablet and grab a good chunk of potential iPad sales.

Is the Fire an iPad killer? No--it’s smaller, and clearly doesn’t pack in the features that the iPad does. But, it does have one thing that has helped allow Apple to maintain a stranglehold on the tablet industry over the past few years--an ecosystem.

Two of the reasons that both the iPhone and the iPad have been so successful is because of their user interface of their devices and the ecosystem that is iTunes. It’s a one-stop shop that allows users to seamlessly move between different types of content (movies, TV, music, books, podcasts, games, productivity apps).

Assuming Amazon gets the user-interface right (which they did with the Kindle already), they have a similar, and in some ways superior ecosystem to offer their users. Amazon has a full-fledged Android app store, a music store that allows you to store and play music in the cloud (with cheaper prices than iTunes), a first-party streaming video service (no need for Netflix), and the world’s leading online bookstore. Not to mention, Amazon itself is already the world’s biggest online department store. The only thing Amazon was lacking was a mobile device that would allow you to access their entire suite of services, and now they have that in the Kindle Fire.

The iPad may be more feature-rich, but for most content consumers, being able to get all their music, video and books in the same place, in addition to shopping for anything else they need through Amazon will provide the type of seamless experience that only the iPad has provided so far. And the Fire will provide this for $199, as opposed to the cheapest iPad, which is $499.

So, I could buy two Kindle Fires, and $50 worth of content for each of those devices, for the same price as the cheapest iPad.

Think about that for a minute.

Regardless of whether or not you’re excited about the Kindle Fire, you should be excited about what Amazon just did. In a “Tablet War” that has so far been all hype and no substance, Amazon may have just changed everything.

UPDATE (10/5/11)--I was reading a few stories today that estimated Kindle Fire pre-orders at over 250,000 already. With a month and change left before the Kindle Fire launches, the tablet could sell more than the 300,000 the iPad did in it's first day.
Posted by See Brian Write at 7:51 AM