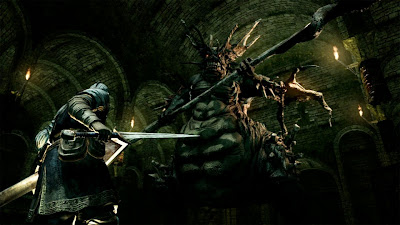 Having finally settled on a starting character, I was ready to begin my Dark Souls experience. The opening cut scene was fairly confusing, but from what I gathered, you start off in an asylum for the undead. You are unlike the other undead however, as you’re not a mindless, shambling zombie. The first area of the game features you fighting your way out of the asylum and battling your first boss, a sort of jailor demon who watches over the asylum. That’s when I knew that dark souls was going to live up to the hype. In the first game, you ran into a boss right away who killed you, sending you to the main hub of the game--you weren’t expected to be successful against him. In Dark Souls, you have to complete a proper boss fight before you can even access the hub area of the game.

So, after a few crushing defeats at the hands of the demon, I figured out you could do extra damage by dropping down on top of him for a critical hit. That made the fight go a lot easier, and I finished him off with ranged spells after the initial attack. Needless to say, my decision to start as a Sorcerer paid off.

I probably spent about 1.5-2 hours in that initial area, after which I went to the starting hub for the rest of the game. In that time Dark Souls confirmed that it wasn’t going to make anything easy for me.
Posted by See Brian Write at 7:09 AM