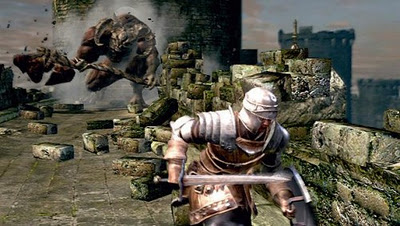 After beating the first boss and getting into the main hub (Firelink Shrine) of Dark Souls, the game starts to open up. You can choose to enter into different areas, although the game gives you some guidance on where to start. I was following the strategy guide’s suggested route through the game, as it’s brutally difficult enough without going through the hardest areas first.

After resting at a bonfire (the game’s version of checkpoints), I headed up the side of a cliff into the Undead Burg. As the name implies, this place was teeming with zombies and skeleton warriors, each more than capable of killing me with a couple of strikes. Immediately I was reminded of one of the golden rules of Dark Souls--always have your shield ready. Enemies love to ambush you from around corners, and some of their attacks are more easily blocked than dodged. No matter what class you play, you should have enough points in the appropriate stats to wield a shield effectively. Blocking and attacking are both tied to Stamina, which is a limited resource that needs to recharge after a certain number of actions. My first several encounters led to me dedicating more points to my Endurance score to increase Stamina, as I was frequently having my guard broken due to running out.

My initial strategy of using ranged attacks to soften enemies and then finishing them with melee was met with mixed results. In Demon’s Souls, most enemies would not stop and heal themselves during an encounter. In Dark Souls, it happens all the time. It was frustrating to use a few of my finite number of spells to do some initial damage, only to have an enemy be back at full health by the time I closed then gap for melee. So, I had to adjust my strategy. Instead of sniping from afar, I had to lure enemies toward me, use a quick ranged attack, and then close on them before they healed. This lead to more close encounters than I would have liked, and more deaths early on. Whereas I relied heavily on ranged attacks in the first game, I had found so far that mid- to close-range was where most of my encounters were happening in Dark Souls. Making things more dangerous was the fact that enemies often appeared in groups, and it wasn’t as easy to lure them out one at a time as in the previous game.

A few hours into the Undead Parish, I squared off against the next boss--the Taurus Demon. He’s a giant minotaur that literally vaults over a tower onto a castle walkway to face you. Taking what I learned from my first boss encounter, I climbed up one of the towers and dropped down on him for extra damage a few times, then sealed the deal with ranged spells. Of course, it took me four tries to beat him, and I spent about four hours overall getting through that section of the game. My most notable death of this section--one time I had the Taurus Demon down to almost no hit points, when I rolled to avoid an attack and plummeted thousands of feet to my death off the side of the walkway. It took me a half hour just to get back to that boss fight.

Such is Dark Souls.

Taurus Demon defeated, I pressed further on into the Undead Parish...
Posted by See Brian Write at 6:56 AM