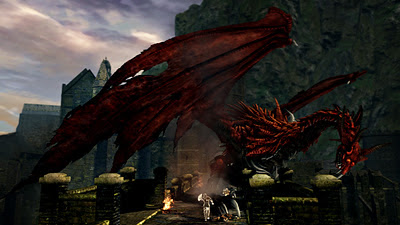 I didn't get much of a breather after beating the Taurus Demon, because right around the corner, a giant red dragon named Hellkite was blocking the bridge I had to cross. After being roasted to a crisp the first time I tried to cross, I scoped out the area a little better. I ended up running into an NPC--a knight named Solaire, a sun-worshipper that represents one of the factions you can join in the game (more on that later). After talking to him, I went back up to try and cross the bridge again. The trick to getting through the area is to dive into the stairwell that is about halfway across the walkway on the right. It leads to an area that takes you under the bridge, so you can avoid the dragon altogether. There’s also a shortcut you can unlock that takes you back to a central part of the level, which came in handy later on.

As I made my way under the bridge, I could hear the dragon bellowing and see it’s tail swinging above. Having read about a cool weapon I could get here, I took out my bow and repeatedly shot the dragon’s tail. After about thirty arrows, the tail actually fell off, and I was rewarded with a powerful weapon called the Drake Sword. Early on in the game, this weapon proved to be a lifesaver, due to the high damage it delivers. I would need that, as the rest of the Undead Parish is pretty brutal.

Rounding the corner, I came to a series of open air staircases that led up to the parish itself. Guarding the stairs were a bunch of soldiers and a gigantic armored boar. The soldiers were easy enough to dispatch, but the boar charges for huge damage, so I had to lead it into a bonfire a few times to take it out.

Before heading into the parish itself, I went and found the nearest bonfire to save at. There is also a blacksmith near the checkpoint, so I was able to have my equipment repaired before heading back out. Then it was on to the parish.

The parish is tough all the way through. Coming through the side entrance, I immediately caught the attention of a giant, mace-wielding black night. One crushing blow from his mace knocked off about three quarters of my health, so I died a few times before finally figuring out his patterns. Luckily, he is one of the few enemies that don’t respawn when you save a a checkpoint, so I went back and healed up before going back in.

After quietly avoiding some undead knights on the first floor, I made my way upstairs and was forced to confront an undead knight at the top of the staircase. After felling him, I walked into an absolute beatdown. A mage was standing amidst a group of undead, and he cast a spell that sent them into a frenzy. The swarmed me, and I was overrun before I knew what hit me.  I had to start back at the bonfire and fight my way up there again, where I lured the mage out and killed him before confronting the horde.  The secret to defeating the frenzied undead was to keep them bottlenecked in the hallway so they couldn’t overwhelm me. After finishing them off, I was ready to head up to the rooftop to fight the bosses--the Bell Gargoyles. I’ll get into that next time.
Posted by See Brian Write at 7:49 AM