I Love the Muppets 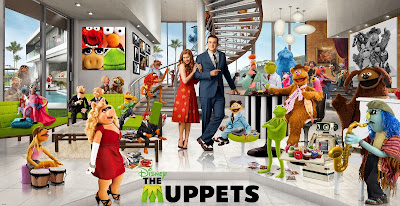 This is not a review--I just had to write about what I experienced the other day.

I grew up with The Muppet Show. I was two years old when it started, and for over five years, I spent every Sunday night with them. Watching The Muppet Show every week with my family is one of my fondest childhood memories. Like most people my age though, I lost touch with the Muppets as I grew older. The first couple of movies were great, but the later ones were pretty mediocre, and none of them captured the magic of what those Sunday night shows were like.

From the first trailer I saw for The Muppets, though, I had hope. I love Jason Segel, and when I found out how much he did to make this movie a reality, I began to get excited about how good it could be. The the reviews came out last week, and were almost universally positive. I was really happy as I sat down in the theater with my two kids the other day, thinking about how cool it was going to be to see a new, fun, Muppet movie.

Within the first five minutes of this movie however, I was literally crying tears of joy. because this movie is absolute magic. I am not going to spoil one moment of it for you, because you need to go see it. Like right now. If you have ever liked the Muppets, you will bawl your eyes out during this movie. It is a complete love letter to my childhood, and I was shocked at how emotional I was to see all of these characters again. On top of that, you can see the love that every person involved has for the Muppets--it oozes from every single scene.

I sincerely hope that we will see a revival of the original Muppet Show, because there really isn’t anything on TV like it, and there hasn’t been since 1981. If this is as close as we get however, at least I was able to share with my kids this amazing experience.

The world is a better place with the Muppets in it. Go support this movie.
Posted by See Brian Write at 7:34 AM

Email ThisBlogThis!Share to TwitterShare to FacebookShare to Pinterest
Labels: Writing