My Move to Digital Comics--Part 1 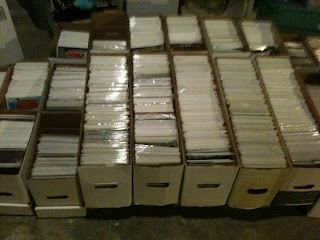 As I mentioned recently on the Secret Identity Podcast, I have decided that in 2012 I will be weaning myself off of print comics and moving almost entirely to digital. By the end of the year, I will only be collecting Spider-Man books in single-issue, print form.

So why make the move? For starters, there’s the space issue. I am running out of room to store my collection. As it is, I have a bunch of longboxes in the basement, and a few shortboxes in my man cave, it’s not really working.

The there’s the cost of print comics. Even with a subscriber discount, I’m paying roughly $2.40 to $3.20 per book, depending on the cover price. Through DCBS, the discounts are better, but I only get them once a month, and I’ve actually been spending more money, buying more books because of the discounts. With DC books in particular, I can now get 1-month old issues for $1.99 digitally (Marvel also drops prices eventually, but I don’t think they’re following DC’s lead on the one-month thing yet). All of the digital apps also offer frequent $.99 sales on back issues, where you can get whole runs at a time for a buck apiece. For some of the smaller publishers, I prefer Drive Thru Comics, as I get a watermarked PDF that I can read on any device, and the prices are even better than most of the other digital marketplaces (I’d love to see an app from Drive Thru, though).

A bigger factor than both of those mentioned above however, is that I just don’t feel like a lot of comics are worthy of keeping anymore. I already have enough print comics to last the rest of my life if I went back and started reading them all today. And with the number of comics I’m buying right now, I haven’t been going back to read a lot of those books. Moving to digital, I can keep up with the books I want to follow, without adding more books to the ever-growing pile. I have plenty of back issues in print to dive into whenever I want, and when I read a truly amazing run in digital format, I’ll probably pick up the trade in print to put on my bookshelf. As I mentioned above, the one exception to my digital move is Spider-Man, particularly Amazing Spider-Man. Dan Slott is on a legendary run right now, and Spidey is my favorite character of all time. Not to mention, my Spidey books are the ones I want to pass down to my kids someday.

So, the move is on. My DCBS order for this month was ⅓ of its usual size, and I’ve already dumped several titles that just weren’t impressing me. On the flipside, I’ve checked out a bunch of digital titles that I hadn’t bought in print, like Batgirl, Hawk and Dove, Locke & Key and The Infinite, all at lower prices than I would have paid in print.

Over the course of the next year, I’ll be posting about how the move to digital is going, new books I’ve discovered, books I’ve dropped, etc.
Posted by See Brian Write at 1:26 PM