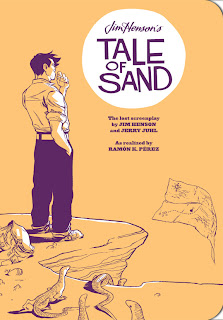 I have not been able to stop thinking about Jim Henson’s Tale of Sand since I read it over two weeks ago. It’s a book that not only stays with you, but compels you to go back to it multiple times, and each trip back offers something new. That’s pretty rare in comics nowadays, and it’s one reason why I picked Tale of Sand as my favorite original graphic novel of 2011.

For those unfamiliar, Tale of Sand is based on a screenplay written by the late Jim Henson (Sesame Street, The Muppet Show) and his writing partner Jerry Juhl in the late 60’s and early 70’s. The screenplay never made to film, but The Jim Henson Company, Archaia Entertainment and artist Ramon Perez have brought the story to life as an original graphic novel. After reading it, I actually think this was the best medium for the story to be told in.

Tale of Sand is less a linear story than a series of vignettes or scenes, featuring a main character named Mac. As the book opens, Mac finds himself in an unnamed town in the Southwest as a huge celebration is going on. As the celebration swirls around him, he slowly realizes that all of the peopple there are celebrating him, and they’re urging him forward to the sheriff’s office. The sheriff greets him warmly and then begins to explain that it’s a big day, and Mac needs to get going. He gives Mac a backpack full of assorted items, and then shows him a location on a map that he needs to get to. He then escorts a confused Mac out of town, telling he he has a ten-minute head start, and not to trust the map that he just have him. With that, Mac sets off on a surreal journey, not sure of what awaits him, oe even where he is supposed to be going. Along the way, he is pursued by mysterious men, visits impossible places and continually tries to make sense out of the adventure he’s on.

Tale of Sand is a visual story in every sense of the word. There’s not a lot of dialogue, and the people and places Mac happens across could only be done justice by an artist on the page. For instance, at one point a limousine approaches Mac as he is wandering the desert. Mac opens the door--and a lion jumps out at him. Just as the lion corners mac and is about to have him for lunch, it’s gunned down by a big game hunter that drives up in a convertible with two tribesmen. They tie the carcass to the front of the car and then speed away, leaving Mac alone in the desert again. The way Perez communicated this encouter is something that even the best special effects masters wouldn’t be able to some close to on screen.

While I didn’t find there to be a linear narrative in the story, there are a lot of themes, and I suspect everyone who reads it will come away with something different. I read Tale of Sand as a metaphor for the journey through life. You never really know what your true destination is. and the journey is the important thing. As you try to make sense of the world around you and find your way, you are driven by both your biggest successes and your worst mistakes. Many of the encounters that Mac has in the book made me think of different points in my life, and I enjoyed it even more because it was left open to interpretation.

If there is a film out there that Tale of Sand reminds me of, it’s Terry Gilliam’s Brazil. As with that story, Tale of Sand is an experience you need to have--I can’t do it justice by trying to explain it to you. Even if this type of storytelling isn’t your cup of tea, you should read this book for the masterful art of Ramon Perez--it’s absolutely stunning.

You can check out a preview of Tale of Sand over on Archaia's website here.
Posted by See Brian Write at 1:51 PM