My Move to Digital Comics--Part 2 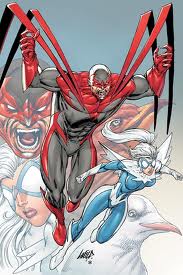 Since the New Year started, I have been moving full steam ahead with my transition to digital comics. I put my print collection in order, and started whittling down my comic lists into three categories--(1) Still collecting in print, (2) Switching to digital and (3) Dropping altogether. There is also an emerging category of new books I’m checking out digitally, so I guess that makes four altogether.

The following is an incomplete list off the top of my head of where things are at right now:

Obviously, this list in in constant flux (except for dropped books), as I’m still really figuring out what books I want to follow, especially in the new DC 52. There are also a ton of one-shots and indie books that I’ve checked out, which I will try to bring to the podcast more often. Probably the biggest change during my move to digital so far has been my culling of Marvel books. This is primarily because of pricing. At $4 for most print books, it’s just not worth it, and most of their digital offerings are still at the same price. While DC drops issues to $1.99 after a month, and makes some back issues $.99*, Marvel keeps their prices closer to print for a longer period of time. Even back issues of old series are overpriced. Until they bring their prices down, I’ll be staying away, or waiting for sales. Case in point--I picked up the first four issues of Remender’s Uncanny X-Force for $.99 apiece the other day in a sale. The next few issues are $1.99, but after issue #7 they jump in price again.

One of the things I am enjoying most about this transition is that it’s really making me examine my reading habits, as well as go back and read all of the back issues I have. This past week, I went back and read Dan Slott’s The Thing series from 2006, which I’ll talk about on the Secret Identity Podcast in the near future.
Posted by See Brian Write at 11:56 AM No comments: