Coming Back to Golf--Part 2: Club Shopping 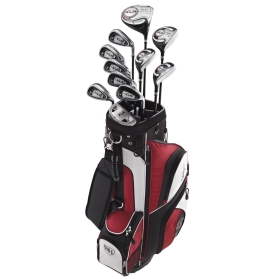 As I mentioned in my previous post, I am in the market for a new set of clubs. I sold my old ones to the person who had been using them, and I want a fresh start.

I went to Dick’s sporting Goods today, as they are having their big golf sale this week. While I was drawn to the expensive clubs while browsing, I have made the decision that I am going bargain basement with my re-entry to golf. It’s an expensive hobby as it is, and I’m not sure how committed I’ll be until I actually get out there and start playing. Not to mention, I was never an amazing golfer to begin with, so I have no business looking at the high end stuff.

Dick’s actually had a couple of sets in the cheap section. There’s a 16-piece set of Acuity clubs for $149 (marked down from $299), which are Dick’s no-name brand that they manufacture. All of the user reviews I’ve read online have been mixed, and I’ve read more than a few that mentioned broken clubs. The next step up from the Acuity set is another Dick’s exclusive brand, a Walter Hagan 17-piece set for $199 (marked down from $399). Not only does this set look better, the clubs feel less flimsy than the Acuity clubs. I couldn’t find any reviews on this set, as it’s new for 2012. After playing around with both sets for awhile, I decided not to commit to anything today, and check out a few other places in the area.

One of the things that frustrates me about club shopping (and I remember this from the last time I bought clubs), is that I can’t find any major golf outlets or sites that review the low-end stuff. It’s all user reviews. Golf has kind of a snobby culture to it to begin with, and all of the news outlets and review sites focus on the higher end equipment. In reality, most people who are just starting out are buying the lower end equipment. My first set of clubs were hand me downs from my grandfather (a decent but old set of Jack Nicklaus irons), but the first set I bought were a low-end set of Dunlops. And I loved those clubs--I played them for years and they took a beating on the golf course. I did finally manage to break my five iron, but it was at the driving range, after a really bad shot. I had also left the clubs in my car through two winters. My point is, a lot of people have to buy the low-end clubs just to get into the game, and there should be a resource out there where someone actually gives a thorough review to entry-level equipment.

I was thinking a lot about this, and as I try to get back into golf, I will be trying to find bargains wherever I can, and documenting them here. clubs, balls, gloves, shoes--you name it. I will try to find cheap but decent equipment and I’ll write about whether or not it’s any good.
Posted by See Brian Write at 7:00 AM