Coming Back to Golf 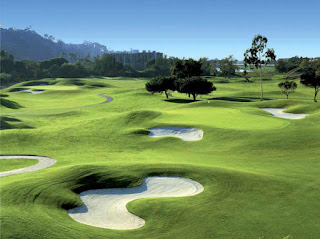 Up until about 2007, I was an avid golfer. I played 6-7 times a month during golf season, and consistently broke 100. I wasn’t great, but I loved the game, and I cherished every opportunity to play.

What really drove my love for the game was a yearly golf trip that I took with a buddy of mine. For nine straight years, we would head down to Florida in April or May and golf as much as possible for 5-7 days. We’d play 36 holes a day whenever we could. We’d eat, sleep and breathe golf the entire time. Over the nine years we went down there, we hit Fort Lauderdale, Miami, Orlando, Tampa and more. We played everything from TPC’s to the famed Doral, and all courses in between. Those trips are times I will never forget. And the best part was that by the time we got back home, golf season was just getting underway in New England, and we were already in midseason form.

Sadly, 2006 was the last time we were able to take our Florida trip. A combination of factors lead to us being unable to make the trip come together in 2007, though we tried until the last minute. I was so dejected that I didn’t even pick up a club until July of that year. When my second child came along that summer, golf took a back seat, and I’ve never really been back. Over the course of the last five years, I’ve probably played a total of ten rounds of golf. My love of golf was so tied to that trip that when it went away, I just couldn’t get back into the game.

For the past five years, life has kept me pretty busy, in the form of two children, a wife and the podcast I’ve been doing since 2006. But over the past several months, I’ve been feeling a pull back toward the game that I used to love so much. So this past week, I made a decision--I’m coming back to golf this year. I sold my old clubs to a friend who’d been borrowing them for the past couple years. I’m getting a new set, and I’m approaching the game as if for the first time. I have no idea what to expect from this upcoming season, but I am going to keep a journal of sorts here on the blog. I am hoping to really find that love of the game again, and perhaps even introduce it to my kids.

So stay tuned, as I’m going club shopping in the next week.
Posted by See Brian Write at 8:11 PM