My Move to Digital Comics--Part 3 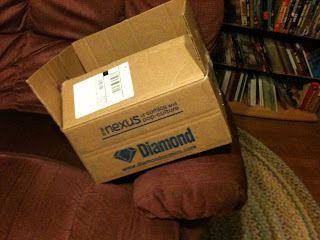 Over the past few months, I've been discussing my transition from print comics to digital. By the end of 2012, I expect to be buying almost all of my monthly comics digitally, and only purchasing a few longtime favorites and back issues to fill holes in collection in print. You can read my first couple of posts about this transition here and here.

Anyway, this past weekend I got a big box of comics from DCBS (Discount Comic Book Service) that comprised about three months worth of comics. As I pulled the huge stack out of the box, it dawned on me that this was the last big batch of print comics I would be getting. I've already pared my last couple DCBS orders to a fraction of what they used to be, and the snafu that caused the delay in this shipment likely won't happen again.

For a moment I was sad, but when I started going through the pile, I realized that it was for the best. Because this order was a few months worth of comics, a good chunk of the issues I recevied were from titles that I have since stopped reading. In fact, I would say that almost half of them were from sereis that I gave the axe, for no other reason than they just weren't worth the money I was spending on them. One of the byproducts of this move to digital has been the realization of just how many comics I was collecting out of momentum or brand loyalty. Titles that weren't worth the $3 or $4 I was spending, but I kept reading because I was afraid I would miss something, or because I am a completionist.

But not anymore. By narrowing my list of comics I am still buying in print, I have also become much more discerning about what I am buying in general, be it print or digital. Even at a $.99 digital price point, a book needs to really grab me and hold onto me now in order for me to keep buying it. Granted, I'm much more willing to give new books a try at a lower digital price point, but they had better be good, or they get the axe.

I wonder if many other comic readers are now going through a similar thought process. I can't be the only one. And if comic readers across the board are starting to care less about brands and more about quality content, then publishers and creators will be under more pressure to ensure that what they put out is a quality product. In that way, the digital revolution may not be the death knell of the print comic industry, but instead a force for quality control.

More than anything else, I think what's in trouble in terms of the print industry is single issues. I would argue that the whole industry would be better off if single print issues went away aItogether, and trades were the only print option. If managed correctly, publishers could potentially make more money this way, and readers would often pay twice for the same content--once digitally, and then again in print.

Take me, for example. I just read the first five issues of Animal Man digitally, paying $1.99 per issue on ComiXology. The book was such a good read that I decided it was worth getting in print, so I ordered the first trade. Essentially, I have rewarded both DC and the book's creative team for putting out a quality product by paying for it in two different formats. Of course, that assumes everyone is compensated appropriately for both print and digital sales, which is another discussion entirely. But the point is, I am living proof that offering a digital discount can lead directly to print sales. So another thing I've learned through this transition so far is that while I will be moving away from buying monthly comics in print, I could end up buying more trades in addition to the monthly comics I buy digitally.
Posted by See Brian Write at 3:35 PM