My Move to Digital Comics--Part 5: Bringing New Readers to Your Work 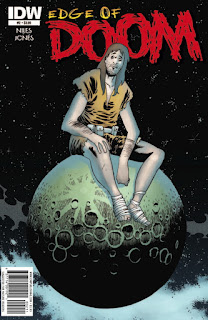 In my very first post about my transition to digital comics, I mentioned how I had been checking out a lot of comics that aren't normally on my radar due to the discounts that digital offers. That trend has continued over the past couple of months, and there have been a couple of recent examples that I think highlight the ability of creators to use digital to bring potential readers to their work.

After reading the first issue of the new Conan the Barbarian series and loving Becky Cloonan's art, I found out that she was going to be on a panel I was moderating at Boston Comic Con. I looked her up on the web and found that she had written and drawn a story called Wolves for a Japanese anthology, and it had since been adapted to English. the single-issue story was available on Graphicly for $0.99. Knowing nothing about it, I immediately bought it, and the story turned out to be fantastic (I reviewed it on issue #420 of Secret Identity).

Last week, I saw a post on Twitter by Steve Niles about him offering a free digital copy of a comic called Edge of Doom on his website. This was a series that he did through IDW back in 2010 that I had completely missed. I downloaded the free issue and was blown away at how awesome it was. I immediately tracked down a trade of the whole miniseries and bought it.

Both of these recent purchases got me to thinking about how creators can use digital to bring readers to their work--particularly their creator-owned work--and introduce them to books they might not otherwise check out. By offering these stories at a reasonable price (in this case, $0.99 and free), there is little to no risk for the reader, and a huge upside for the creator if the person likes what they read.

With print comics, there is always a huge risk of a potential reader missing a book when it comes out, or being afraid to take a chance on a print book due to price. For independent, self-published books (as was the case with Wolves), print quantities may be limited, and the books won't be on every LCS shelf to begin with. That's where digital can offer a second opportunity to get readers' eyes on a book, or introduce them to some new stuff by a creator they already like.

It's exciting to see creators using the digital medium as a tool to expose readers to their work. There is so much stuff out there that we don't even know we're missing.
Posted by See Brian Write at 7:55 PM No comments:

My Move to Digital Comics--Part 4 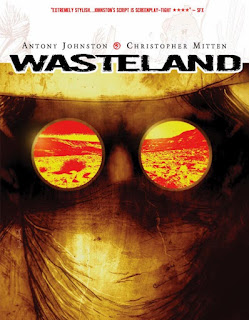 I made my first big digital purchase a couple weeks ago. ComiXology had a sale on Antony Johnston’s fantastic Wasteland series. All 35 issues of the series so far were $0.99 each. I’m missing about twelve issues total from my print collection, so I planned on grabbing those when I opened up the app on my iPad.

And then I saw it--a digital omnibus collection of the entire 35-issue run to date of Wasteland for $19.99. 994 pages of post-apocalyptic awesomeness for a mere twenty bucks. Just for the sake of comparison, purchasing all 35 issues at the regular cover price of $3.99 would have totaled about $140.

So, I made my biggest single digital comic purchase to date and grabbed the whole series. Even though I have a bunch of the issues in print, it will be nice to have the whole collection at my fingertips. And, I’ll be getting the rest of the series digitally from here on out.

This was the first time I’ve seen an exclusive digital collection at such a big discount, but I’d like to see a lot more of it. I would be grabbing up series left and right. Hopefully this collection proves successful so that other series will follow suit.

Now if you’ll excuse me, I have A THOUSAND PAGES of Wasteland to go read. Good day.
Posted by See Brian Write at 11:21 AM No comments:

Coming Back to Golf--Part 4: The Range

I finally got a chance to head out to the driving range recently, and the results were about what I expected from my golf swing. Despite not playing for the past few years, I was able to make contact with the ball pretty well overall.

Sadly however, everything I used to do wrong came right back, as if I never laid down the clubs. I swing too fast and too hard, which often results in either slicing the ball or coming over the top of it. So although I made good contact with about 55 of the 60 balls I hit, I really only hit about 7 or 8 good shots. There were a lot of mediocre shots, and some real stinkers.

The best part of the visit to the range was getting to try out my new clubs, and finding out that I really like them (remember, I am using the Ram G-Force cheapo set). The irons have a good weight to them and feel solid when you make contact with the ball. I didn’t hit too many wood shots, but both the driver and the 3-wood felt good. I was worried the graphite-shafted woods would have too much flex, but that wasn’t the case. So, first range visit under my belt, and i’ve got plenty to work on before I’m ready to go out and play a round.

Most importantly--slow down, Brian. I just have to keep telling myself that.
Posted by See Brian Write at 1:35 PM No comments: