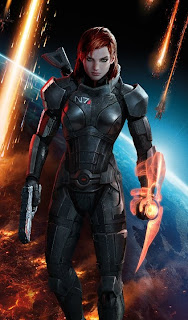 I've been reflecting back on the ending of Mass Effect 3 (and the trilogy as a whole) since finishing the game this past weekend. In fact, I can't get the game out of my head. More specifically, I can't get the story out of my head, and I think it's because I feel such a strong sense of ownership of the narrative that I helped create over the past five years. It's that sense of ownership that makes me realize what a marvel the Mass Effect series is, both from a technical and a storytelling standpoint. In my personal experience, the Mass Effect series is the first series of video games that has truly managed to capture what is was like to play through a Dungeons & Dragons campaign to completion. For that reason alone, the Mass Effect games are my favorite video RPGs of all time.

People like roleplaying games for a lot of different reasons, but the main reason I love them is because I love creating a narrative for my character within the framework that the person running the campaign (the DM) creates. In a good tabletop game, I am presented with the rules, the setting, the lore, and maybe even some recent events that serve as the launching pad for the campaign. I create a character within that framework, fill in some backstory, and decide which traits I am going to emphasize in order to play the character in a way that fits the narrative I'm creating for them. Over the course of the campaign, my actions have an impact on the story, and the relationships I form with other characters (both player characters and non-player characters) all contribute to my character's overall story. While the person running the game has a larger story to tell and had a measure of control over that story and its outcome, I am creating my own character's narrative within that larger story.

It's the dynamic that I just described that many video game RPGs fail to really execute on. Many games allow you to create your own character, some with a lot more customizability than the Mass Effect series. But it's the ability to let the player tell their own story while still maintaining a strong connection to the overarching narrative the most games fail at. Most are too restrictive, offering the player no real room to create their own narrative. Those games may let the player customize the look of the character, but everything else about the game is very scripted. On the opposite end of the spectrum, you have games like the Elder Scrolls (which I am a huge fan of, by the way). The Elder Scrolls games feel at time to me like a D&D campaign with no one running it. They are a giant sandbox where you can create many narratives for your own character in the world, but you often feel disconnected from the story the developers set out to tell. I played through the Elder Scrolls IV: Oblivion twice (over 150 hours), once sticking almost strictly to the main storyline, and another time ignoring it completely. I loved the world and the myriad of things I could do within it, but the main story was never compelling enough to keep me connected to it.

Mass Effect managed to keep the balance between my story and the larger story over the course of three games. It wasn't perfect--there were times where the game almost became too restrictive, especially in Mass Effect 2, where I really disliked how the developers handled some of the storylines. But even when I felt the games faltered, it was mostly with the larger story. I was still allowed to play my character the in a way that was consistent with the narrative I had created. That held true right through the end of the trilogy, when I was able to end my character's story in the way I had been envisioning it since early in the second game. That made for an incredibly satisfying end to the series for me, and one of the most cherished gaming experiences I've ever had.

In my next post I'll get a little spoilery, as I want to talk about the story of my Commander Shepard.
Posted by See Brian Write at 8:43 AM