I don't usually write about sports, but I am a huge sports fan, especially when it comes to baseball and football. I am also a fan of unsuccessful teams, and have been a follower of the San Diego Padres and Chargers since the early 1980's.

Why San Diego? My dad was a big Dan Fouts fan when Fouts was quarterbacking the best offense in the NFL for the chargers in the late 70's and early 80's. His love of Fouts, and those cool lightning bolts the chargers had on their uniforms made me fall in love with the Chargers as well, and I've been a fan ever since.

When I started to get into baseball, I noticed that San Diego had an MLB team as well, and a guy named Tony Gwynn was establishing himself as one of the best hitters in baseball. So, my love of the Padres began and I haven't looked back. Little did I now at the time that I was rooting for two small market teams that, while they have has some bright spots, are generally pretty lousy. The San Diego Chargers, after being very successful in the American Football league, joined the NFL in 1970. In over four decades since joining the NFL, they have been to one. Super Bowl. One. That appearance was on January 29, 1995, when they faced the Steve young-led San Francisco 49ers in Super Bowl XXIX. I will never forget that day, not just because my team had finally made it to the big game, but because they were absolutely destroyed by the 49ers. The final score of 49-26 wasn't even an indicator of how bad the Chargers got beat. Steve Young threw for six touchdowns, Jerry Rice caught three touchdowns, and the 49ers led 49-18 before a late touchdown made the score look respectable. I was crushed by that loss, and that was at a time when i thought the Chargers would be going back to the Super Bowl on a regular basis. It's even worse to think about that loss now, as they have never gotten a chance to redeem themselves. While the Chargers have put some good, even great seasons together in the ensuing years (especially in the last 10), all of them have inevitable ended with disappointing losses. In fact, history may likely look back on the Chargers of the last decade as the best team to not win (or even make it to) a Super Bowl. The legacy of the franchise is one of underachievement. 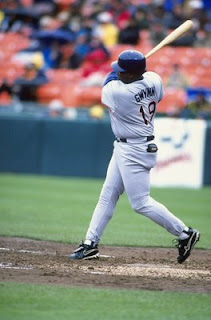 Now let's take a look at the Padres. They've actually been to the World Series twice--once in 1984, and once in 1998. They lost both time, first to the Detroit Tigers, and most recently to the New York Yankees. My happiest moments as a fan of the Padres were when they beat the vaunted Atlanta Braves in the 1998 NLCS (I openly wept for joy),and when Tony Gwynn surpassed 3,000 hits. While there have been great moments for the franchise, and some playoff appearances over the years as well, the padres have pretty consistently been one of the worst teams in the league. In the last several years, they've had one of the lowest (if not THE lowest) payroll in the majors leagues, which makes it difficult to turn things around quickly.

My point is that I like teams that either aren't very good, or have bad luck. I don't know why, but I gravitate to the teams that most people don't care about. In hockey, I was a Hartford Whalers fan until they left, and I've been a Vancouver Canucks fan ever since. No team in the NHL has under-achieved more than the Canucks over the past few years, who a season ago blew a 2-0 lead in the Stanley Cup and lost to the Boston Bruins (this year they were knocked out in the first round). When I was big into basketball, I was a die hard fan of Charles Barkley, who never got to win an NBA championship. For the past several years, I've been a Clippers fan. Until they got Blake Griffin, they were the laughing stock of the league, which is probably why I rooted for them. No professional team I have rooted for has won a championship in my lifetime.

Here's the thing though--when you like bad teams, instead of taking joy out of your team winning, you actually have to take enjoyment from the sport itself. You find yourself becoming a student of the game, taking pleasure out of the nuances of the sport, and recognizing the little positive things that happen over the course of a game, instead of just the final outcome.

So at the end of the day, I think the fact that I root for bad teams has made me a better sports fan. I have a deeper appreciation for the sports themselves, and the intricacies of each, because I have had to look harder for things to be happy about.

At least, that's what I tell myself as I watch the Padres drop another game to the Giants.
Posted by See Brian Write at 1:50 PM