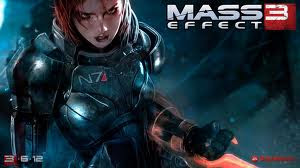 WARNING--I am about to get a little spoilery about the Mass Effect story, so feel free to stop reading now. In my last post, I talked about why I love the Mass Effect games, and now I want to talk a bit about the narrative I created for my character. For that, I will need to spoil some story elements from all three games.

Still here? Great. Beacuse I want to tell you the story of my Commander Aja Shepard. My Commander Shepard was a female marine who was the sole survivor of an incident that occurred on Akuze, a planet that humans were beginning to colonize when subterranean wormlike creatures called Thresher Maws attached and killed the colonists. A unit of Marines went in to investigate and suffered a similar fate, with Shepard being the only survivor. I chose this background for my character out a possible three backgrounds. I wanted a character that had been though some trauma, but had developed a mental and physical toughness that most others don't possess. Humanity at this point is very new to the larger galactic community, and has just started to become a rising power.

In the first Mass Effect, Shepard gets accepted into a group called the Spectres, an elite group that reports directly to the Citadel Council, the UN-like ruling body of the galactic community. The first game involves Shepard investigating a rogue Spectre and uncovering a larger threat against the entire galaxy. As far as my personal narrative, I played my Shepard in the first game as a goody two-shoes, making all the "Lawful Good" (which ME calls Paragon) choices wherever I could. I focused on building my Charm skill (kind of like Charisma), so that I could talk my way out of many situations. My emphasis on diplomacy definitely affected a few key situations throughout the game, as I was able to open up dialogue options that would not be available to characters with lesser Charm skills. In addition to playing the good hero, I also developed a love interest with a alien female scientist Liara T'soni who was studying the ancient race that ties into the larger galactic threat. Of the rest of the NPCs that become potential party members, I most frequently adventured Tali'Zorah, with a female member of a nomadic race who was on her pilgrimage as a rite of passage to find information that she could bring back to people. When given the option, I partied up with my love interest and who became my closest friend, so I became close to these characters over the course of the first game.

In Mass Effect 2, the larger story takes a sharp left turn, as pretty much everything you knew from the first game changes in the first hour. For much of the game, the characters you spent time with in the first Mass Effect take a back seat to new characters and crew members you meet through the second game's story. The gist of the plot is that Shepard has to become allies with a shady humanist organization in order to combat the coming threat to the galaxy, because they are the only ones taking the threat seriously enough. My love interest became a secondary player in this installment, but I did meet up with Tali and was able to adventure with her for a good part of the second game. While I didn't care for the larger story and how it was handled, I was able to continue my character's narrative, which became about losing some innocence and making hard choices that changed my character. By the end of the game, I was less lawful-good and more chaotic good, caring less about the rules and more about results.

Mass Effect 3 sees the races of the galaxy on the brink of extinction. Shepard has rallied everyone she can for an "all or nothing" final battle that will determine the fate of the galaxy, and its a battle against seemingly insurmountable odds. The decisions made over the first two games and part of the third all factor into the final battle, and the possible outcomes of that battle. The core characters that were back-burnered in Mass Effect 2 are brought back to the forefront, which I really liked, as I was able to get the band back together for one last go around. For me, the storyline with my love interest and my best friend had very satisfying conclusions, and ones that were close to what I had wanted to see.

That's what made the finale of Mass Effect 3 so satisfying for me--I was able to complete my character's narrative in the way I had written it in my head. The developers had given me the framework of the larger story, but early into the second game, I knew how I wanted my story to end. I wanted to fight the final battle with the people closest to me, and I wanted my character to make the ultimate sacrifice in order to save the galaxy. And that's the ending I got. I didn't want to walk away cleanly, or be carried out on the shoulders of my comrades, or be given a parade--my Shepard's story was always going to end in her death. It was the narrative I had built up over the course of the three games, and I played the entire third game with that in mind. There were conversation options about not making it through the final battle, and I always chose them. When I had to make decisions about being the nice guy or getting the job done, I chose the latter. my Shepard didn't have time to mess around anymore. I was Lawful Neutral at this point--I had my own personal code, and I was sticking to it. The only laws I cared about now were my own, and people could either get on board or get out of the way. And in the end, the story concluded the way I would have wanted it to. My Shepard had a hard choice to make, and she chose the harder of the two options, which meant she would sacrifice herself (and some others) in order save the galaxy. It wasn't a happy ending, but it was the ending that my Shepard's story deserved.

About a week ago, Bioware released an "extended cut" of the Mass Effect 3 endings, because a lot of fans complained that they were unhappy with how the game ended the first time around. The extra content did change a few details of how the final act played out, but for the most part just added some context in the form of epilogues, showing you what happened to different characters, what the state of the galaxy is post-conflict, etc. I was pretty happy with the added content, as it shone a little more light on the fate of my teammates, but I didn't care for one of the changes, which actually reversed the deaths of a couple of characters that I felt fit well with the story the first time around.

In any case, I really enjoyed my Mass Effect 3 ending the first time around, and that's how my Shepard's story ended. I applaud Bioware for creating a series in which I truly feel that I have told the story of my character. Even in all of the D&D campaigns I've been in, I've rarely gotten to see the story through to the end. Playing through the Mass Effect campaign is easily one of the best roleplaying experiences I've ever had, and for that, I thank you, Bioware.
Posted by See Brian Write at 11:44 AM