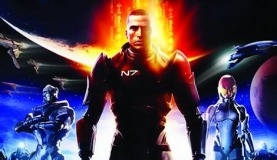 Back in 2008, I had the good fortune to be able to chat with writer Drew Karpyshyn about the Mass Effect series, Drew had been the lead writer for Bioware's Knights of the Old Republic, one of the most acclaimed roleplaying games of all time. When I spoke with him in February 2008, the original Mass Effect had been out for three months,and it was already a monster hit. Drew had been the lead writer on that game, and had also written the first tie-in novel to the game series, called Mass Effect: Revelation.

I'm re-posting this interview for a couple of reasons. One, our old Secret Identity website has been archived and a lot of old content (including this interview) is no longer easily available. Second, my friend Dan Evans and I did a special episode of  Secret Identity called Co-Op Critics, in which we discussed the first two games. I've re-posted that episode on the SI podcast age, as we also recently recorded a new episode where we talk about Mass Effect 3 (which will be posted next week). So, I wanted to have this interview accessible to people for their reference if they listen to the show.

Without further ado, here's the interview I did with Drew back in 2008:

Drew Karpyshyn has worked as a writer for BioWare on many of their most successful games, including Neverwinter Nights, Jade Empire and Star Wars: Knights of the OldRepublic. Most recently, Drew was the lead writer on the award winning Mass Effect, which has sold over 1.5 million copies to date. Secret Identity chatted with Drew about the game and the universe that he helped create.

Secret Identity: Having been the lead writer for both Knights of the Old Republic (KOTOR) and Mass Effect, how did the writing process on KOTOR inform what you did with Mass Effect?

Drew: Obviously with each game we see the writing process evolving and improving. BioWare has always excelled with branching narrative storylines, ever since the days of Baldur's Gate. However, with KOTOR we made the dramatic leap to full non-player voice over, which forced us to change our writing style to make it more cinematic; dialog became tighter and punchier. This paved the way for us to add player voice over in Mass Effect, and to once again take another step towards a fully immersive dialog experience.

Mass Effect is a game that players can experience in a myriad of different ways. How do you craft a story that people will be approaching from multiple angles?

Branching narrative is the most difficult part of writing BioWare style games; it really is something unique to the games industry. To manage it, we have a team of writers who are each responsible for a specific area, planet or region in the game, as well as a lead writer who oversees the writing process and helps to keep all those different areas and player choices on track. There isn't any real secret to it, however; it's just a talent the BioWare writers have developed over years of creating our unique style of games.

In Mass Effect, players always have two NPCs in their party, which they pick from a roster of six. How difficult is it to make each NPC interesting enough that players will want to experience playing with each of them, as opposed to always picking the same two and overlooking the others?

Drew: The interesting thing about the NPCs is that we don't actually worry about players picking only their two favorites and using them all the time; if that happens, we're okay with that. What we focus on is making each character unique from each other character, and interesting on their own merits. That way we insure every player will have two (at least) party members they care about. Often, of course, players are intrigued by 3, 4 or more different party members, but we don't specifically set out to make this happen.

It was great to see that Captain Anderson is the main character in the prequel novel Revelation. Was he always intended for the prequel story, or did that decision come about during the development of the game?

Drew: Anderson existed in the game before the novel was even begun. It took us almost 4 years to create Mass Effect, but only about a year to go from blank page to on the shelves for the novel, so the game had to come first. When I set out to do the novel, I knew I wanted to introduce Saren to the readers, and I knew I needed a strong, moral center in the novel to balance Saren's actions. Anderson - the player's mentor in the game - seemed like a perfect fit, and his history with Saren was already part of his background. All the pieces just fell into place.

You’ve written games and novels based in the Forgotten Realms and Star Wars universes, both of which have established “rules” that you must play within. Do you find it liberating to write in the Mass Effect universe, in which you are making most of the rules?

Drew: There are good and bad elements to working in your own setting as opposed to an established setting. Obviously, Star Wars and Forgotten Realms have a huge audience, and as a fan of both settings I understand what readers are looking for when they pick up a SW or FR novel. With Mass Effect, the audience isn't established, so as an author you're taking more of a risk... you hope your instincts are correct, but you're never quite sure if you know what the fans really want. Also, the freedom to create everything from scratch also comes with a responsibility to explain everything so the reader can follow the action. For example, I don't have to explain the Force in a SW novel, but when I mention biotics in Revelation, I knew readers would need some exposition to help them grasp the concept.

Is there anything you do differently when writing for a game like Neverwinter Nights, which has the potential for user created content, as opposed to KOTOR or Mass Effect, which do not?

Drew: We treat the user created content separately from what we are doing, so they don't really overlap. We used the same process on NWN to create the stories (and on the Hordes of the Underdark expansion) as we did on KOTOR and Mass Effect. The end user tools have more of an impact on the technical side of the game than the writing.

Are there plans to take the Mass Effect into other mediums, either in-house or through licensing, such as comics or pen-and-paper RPGs?

Drew: Obviously we've already expanded into novels, so we are open to exploring other mediums with Mass Effect. However, there are no official plans in place at the moment.

Last, but not least: Will the second installment of Mass Effect pick up immediately after the events of the first game, or will it be similar to KOTOR 2 where it will take place in a different time period, but feature cameos by some members of the original cast?

Drew: I can't say too much about ME 2, but you will expect to see both familiar and new faces. And of course, Shepard (your Shepard!) will be the main character.

Thanks again to Drew for taking time to answer our questions! For more info on Drew, head over to www.drewkarpyshyn.com. To find out more about Mass Effect, check out www.masseffect.com.
Posted by See Brian Write at 8:14 AM