The Tide May Be Changing In San Diego 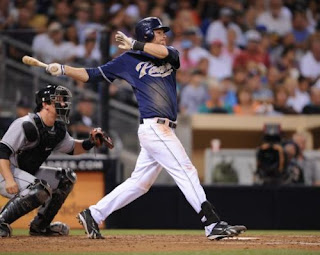 I'm probably wrong, knowing the history of the Padres franchise, but I think a corner is being turned in San Diego. After decades of mediocrity, and being a perennial seller at the July trading deadline, I think the Padres are actually building for the near future and holding onto their best players even though they are in the middle of another losing season.

The Padres signed CF Cameron Maybin to a big contract before the season. They just signed OF Carlos Quentin (the team's best power hitter) to a three-year extension, and they are trying to get a deal done with All_Star closer Huston Street. Third baseman Chase Headley is coveted by no less than six teams right now, but it looks like the Padres are planning on keeping him in SD. All of these moves are against the norm of what San Diego usually does this time of year, and I think it signals that they are serious about putting a contender on the field as early as next year.

The front office of the Padres, including their ownership, has been a mess over the past few years. But amidst the turmoil and the losing product on the field, the padres have been able to bolster their farm system to become one of the best in all of major league baseball. They are rich with priospects and great young players, and they have several guys who are poised to really break out in th next couple of years. When you combine they with their recent efforts to actually keep their veteran talent, things are starting to look up for the near future of the franchise.

If the Padres continue on this path, there is a good chance they can actually compete for the division on a consistent bases as early as next season. While that doesn't change the fact that this year's team has no shot at making the playoffs, it does soften the blow of another losing season. Also, if there is a solid plan in place moving forward, the young players who will form the roster of the future can have a chance to get some experience during this lost season, and better prepare for next year.

The Padres have the lowest payroll in the majors this year, and if that doesn't change, there's on so far they can go as well. But, the new ownership coming in will find that there are a lot of pieces already in place, the farm system is healthy, and a little spending could go a long way. So, if the Padres keep their veterans in place, and cultivate that young talent, the future is bright for the Padres.

Of course, I could be wrong, and the roster could be decimated by the trade deadline. Call me an optimisit though, I think it's different this year.
Posted by See Brian Write at 7:09 AM