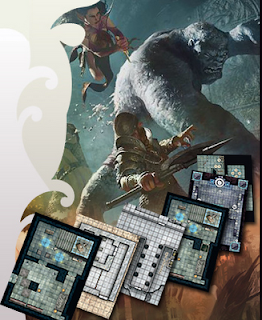 Back in 2008, I attended DDXP, the Wizards of the Coast sponsored Dungeons & Dragons convention (Max Saltonstall, Alana Abbott and I were covering the show for Secret Identity). The show as a special one, as WOTC was on the verge of releasing the fourth edition of Dungeons & Dragons. We got a chance to playtest the game with a bunch of developers, and we also interviewed a who's who of game designers and industry legends.

As exciting as the new edition itself was, one of the things at the show I was most excited about was the Virtual Table, an online suite of tools that would allow players from around the world to gather around a virtual table and play D&D together. For me personally, the inability to get people together for various reasons was one of the main reasons my playing of D&D had lapsed. I was ecstatic about the prospects of getting old gaming groups back together, and starting new ones with friends from across the country.

The Virtual Table was part of a very ambitious group of digital initiatives that WOTC was planning on launching alongside D&D 4E (another of their planned initiatives was to give customers digital copies of any rulebook they purchased in print form). While there was a ton of excitement over WOTC's digital strategy, there were also concerns about whether or not WOTC would be able to implement that strategy, and bring initiatives like the Virtual Table to fruition.

So the fourth edition of D&D launched, and the Virtual Table was nowhere to be seen. Over the past several years, WOTC has released a set of online tools like a character builder, a rules cyclopedia, and encounter building tools, but the Virtual Table never came to fruition. In my personal opinion, this was one of the main factors why 4E was not as successful as it could have been, and I'm not alone in that opinion.

Fast forward to the present, and WOTC is actively playtesting the fifth edition of Dungeons & Dragons. Once again, WOTC had planned to release the Virtual Table alongside the new edition, and they had actually been beta testing it up until very recently. A few days ago however, WOTC announced the following to their community on the official forums:

"While we appreciate the enthusiasm and participation in the Beta phase, we were unable to generate enough support for the tool to launch a full version to the public. Effective July 30, 2012 the D&D Virtual Table Beta will be coming to an end and the VT will be closed."

So, for the second time in the last five or six years, WOTC has tried to bring the gaming table into the digital age and failed. While I was really bummed the first time this happened, my disappointment about the VT dying again is mitigated for a few reasons:


It's really the last reason above that has me optimistic about my online D&D future. Google Hangouts is already pretty robust tool for gaming, and with a few add-ons in the future, could completely replace the concept of the Virtual Table. Right now in Google Hangouts you get video chat and the ability to share documents with the group. Those two features right there are almost enough to get by with. As I was getting ready to post this article, I stumbled across a recently funded Kickstarter campaign for the Tabletop Forge, and application designed to run inside of Google Hangouts that includes a dice roller, maps, tokens and more.

I am currently planning on running some Basic D&D (Red Box) adventures using Google Hangouts, so I'll be putting it through its paces soon enough, and I plan on writing about it here.

So for me, the main difference between 2008 and 2012 is that there are already viable alternatives to WOTC's online initiatives, and there are more on the way. While it's sad that the developers of D&D can't seem to get their own suite of digital tools together, I'll be happy if they just focus on making the next edition of D&D a great roleplaying game, and leave the development of digital tools to those more suited to it.
Posted by See Brian Write at 9:55 AM