Marvel's Refusal to Call 'Marvel NOW!' a Reboot May Actually Hurt Them 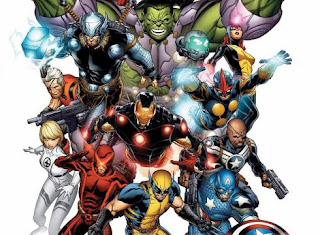 There's an excellent article over on Comics Beat by Todd Allen about some concerning sales numbers from Marvel. One of the main points of the article is that when you look at non-event books and non-#1 issues, sales numbers on Marvel's monthly books are not good. There's some good breakdowns as well as a contrast to DC sales that you should check out in the full article.

The point that really resonated with me, though, is something I've been thinking a lot about lately as well. Those of us who read comics know a reboot when we see it. November's 'Marvel NOW!' project is a reboot. BUT, Marvel continues to insist that it isn't a reboot (or a relaunch), but merely a jumping on point for new readers.

Here's the problem--I don't think the new readers are going to come, and it's because of the way that Marvel is talking about 'Marvel NOW!'. Marvel is worrying so much about not upsetting current readers by calling this a reboot that they're not generating excitement outside of current readers.

Think about how much mainstream coverage that DC garnered because of their line-wide reboot. How many new and lapsed readers started checking out DC books again because of all the buzz around a new DC universe? How many books did you try out because you knew this was truly a continuity-free jumping on point? For me, it was at least twenty new books, and while I may not be reading all of them now, I have consistently tried out different titles from the new line, and have settled into getting many of them each month. Deathstroke, Superboy, Teen Titans, Wonder Woman, Swamp Thing and Animal Man are just a few of the properties I had little interest in before the reboot, but have consistently picked up since.

With Marvel downplaying the significance of their reboot, they are actually killing all the buzz for it. Yes, we are excited about new creative teams, but what else is there to get excited for? Outside of a few creators I really love, I won't be picking up nearly as many of the new books, because I didn't read AvX, and I don't read most of the titles that are tied into it now. Right now, Mark Waid and Leinil Yu's Hulk is the one new book I am planning to get. That's it.

Not to mention, many (if not all) of these new books are going to be $3.99. Contrast that to the fact that almost all of the DC New 52 was launched at a $2.99 price point, and there's another reason to not try new titles when 'Marvel NOW!' arrives.

DC took a big gamble last year with the New 52. Some longtime readers have sworn off of their books, because they don't like the new universe. But almost a year into their experiment, it has been a sales success for them. As Marvel get closer to their 'Marvel NOW!' launch, I think they need to fully embrace the idea of a reboot/relaunch, instead of walking a line between longtime fans and new readers that could result in no one ultimately being that interested in it.
Posted by See Brian Write at 9:26 AM

Email ThisBlogThis!Share to TwitterShare to FacebookShare to Pinterest
Labels: Comics