The New Nook Color HD+ Could Be Great 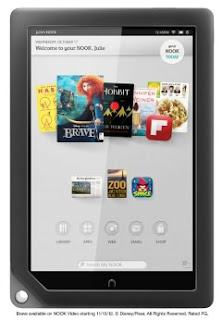 Being the gadget addict that I am, I bought a Nook Color when it launched in October of 2010. I really like the form factor of the device, as well as the ability to add more storage via microSD card. The microSD card slot also opened the Nook Color up for hacking, and it wasn't long before I had upgraded the default Android 2.2 operating system to 2.3 (Gingerbread). While the device didn't end up being as versatile as I had hoped, and the app selection was pretty sparse, I got plenty of use out of it for a while. I eventually picked up a Dell Streak 7 at a big discount, and gave the Nook color to my wife. She still uses the Nook Color to this day, and really enjoys it.

After my Dell Streak 7 (which was another decent tablet), I ended up getting an Amazon Kindle Fire when it launched, and that's been my go-to 7" tablet since. I use Amazon quite a bit, and I'm a Prime member, so the instant videos and eBook lending library have provided me with plenty of content over the last year.

The Google Nexus has recently disrupted the 7" tablet market in a big way, as the Jelly Bean operating system is really slick, and consumers don't have to worry about third-party interfaces mucking up their Google experience. If I was buying a 7" tablet right now, it would definitely be the Google Nexus 7.

Recently however, both Amazon and Barnes & noble announced new 9" tablets that are substantial upgrades from their 7" counterparts. Both are at a size that draws more direct comparisons to the iPad, and both are substantially cheaper ($299 for Kindle Fire HD and $269 for Nook HD+). Unlike the Kindle Fire HD, the Google Nexus 7 and the iPad however, the Nook HD+ will have a microSD card slot, and that's what makes it interesting to me.

As I mentioned before the microSD card opens the device up for hacking, which offers a world of possibilities. Rather than being at the mercy of Barnes & Noble for software updates, once that device is hacked, users can keep Nook Color HD+ running the latest version of Android, as well as apps outside of the B&N ecosystem.

So potentially, for $269 you can grab a very customizable Android tablet with an HD display and an HDMI out this holiday season. Not too shabby.