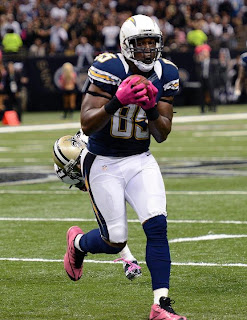 Last night the San Diego Chargers stepped into the Superdome with the deck stacked against them. The underachieving New Orleans Saints were desperate for a win. The game was on national television in prime time. And QB Drew Brees was one touchdown away from breaking Johnny Unitas' streak of consecutive games with a touchdown pass. The occasion was so special for Brees, that he petitioned the NFL and was granted the opportunity for his suspended coach Sean Payton to attend the game to watch the streak be broken.

Every football analyst in America, as well as commentators Al Michaels and Chris Collinsworth, had written the storyline before the game was even played. Brees would lead his team to victory, and break the streak in the process.

And when the San Diego Chargers refused to cooperate with that storyline in the final minutes of the game, the NFL referees stepped in and made sure the storyline would be kept intact, with a series of highly questionable calls that cost the Chargers the opportunity to tie the game on their final drive.

The most egregious of the calls was an offensive pass interference call against San Diego TE Antonio Gates, that negated a 28-yard gain and would have had the Chargers on the saints 24 yard line with just under two minutes left. That was followed by a phantom holding call that negated a 23-yard completion to WR Malcolm Floyd. In the span of a few plays, the Chargers had gone from being near the Saint 20 yard line to being inside their own 30. Precious time had bled off the clock, and while Rivers eventually got the Chargers back into Saint territory, the momentum had been lost. The game ended on a sack of Rivers and a fumble.

Granted, the Chargers never should have been in that situation in the first place. Their offense was great all night, but the defense fell apart in the second half, allowing the Saints to catch up and eventually take the lead. But the way the refs took away San Diego's chance to even things up at the end was shameful. It just felt like there was an ending to the game that was predetermined, and no one was going to allow the Chargers to change that.

I'm a Saints fan, and a huge Drew Brees fan (he's a former Charger, after all), but the way last night's game ended was just plain sad.
Posted by See Brian Write at 11:37 AM