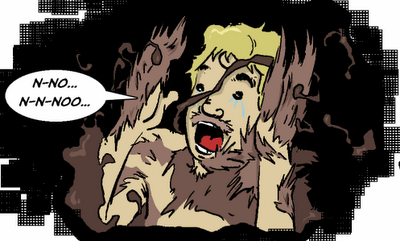 The final chapter of Mo Stache has begun! When artist John Cordis and I started this comic in September of 2010, we had no idea where we would end up. We weren't even sure we'd really get it off the ground, as he was drawing week to week, and I had only scripted the first thirty pages of the story that will eventually span well over a hundred.

But here we are, and as we charge into the final chapter of Mo Stache, we can't wait to share the rest of the story with everyone. What began as a small story of a man and his alien mustache has led to an epic adventure involving a full-scale invasion of the planet. Chapter Four opens with Dave having to explain what's going on to his boss AJ, as the streets of Springfield are under siege.

From now until the end of our tale, it's pretty much non-stop action. If you haven't checked out Mo Stache as of yet, you can catch up on the whole story so far for free at www.mostachecomic.com. The latest page goes up tomorrow, and I think it’s one of John’s best to date (the pic at the right is a little teaser from it).

Thanks for reading!
Posted by See Brian Write at 6:43 AM