COURTING THE KING IN YELLOW--Deja New 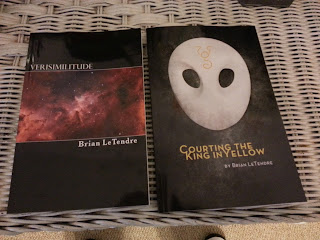 The print proof of my book, Courting the King in Yellow, arrived the other day. It was weird to actually hold in my hands a tangible copy of this thing I’d been working on and thinking about so much. But, it was a feeling I’d had once before, in early 2008.

In the picture to the right, you can see CtKiY sitting next to a book called Verisimilitude. That is actually the first draft of Courting the King in Yellow, in a much rougher format, and under a working title. At the time, CreateSpace had offered a free proof of your NaNoWrimo novel to anyone who finished the 50K-word challenge. So, I loaded up my unedited draft, and sent away for my free copy.

Which has sat on my shelf, staring at me every day since the moment I received it.

Getting the proof of CtKiY was a big moment for me, as it drove home the fact that I’ve actually brought the project to fruition after so long a time. It didn’t matter that there were still some things I needed to revise before the final print version would be ready. I had taken the ball of clay that was Verisimilitude in 2007, and molded it into Courting the King in Yellow. I’m very proud of that fact.

For those of you that enjoy insight into the process (like I do), here’s the few things that i needed to change from the first print proof:

1. I didn’t like the way the title of the book looked on the top of each page. I found it distracting, so i removed it. For some reason, I did not find this as distracting in the PDF or ebook versions. The print version looks cleaner now.

2. I had to adjust the page numbering so it appeared properly on each page. For the electronic versions, it’s fine to have page numbers appear in the bottom left corner, but I forgot to center them for the print version.

3. My picture in the “About the Author” blurb printed out poorly, so it’s gone. In the print version, there will be only text now.

That was pretty much it, which made it a little annoying to have to send things back to the printer before I can sell it. But, these things would have bothered me if I let them go. I am currently waiting for the revised proof to arrive in the next several days, and the print version could be available for purchase by December, just in time to scare the pants off someone for Christmas. It will make a great stocking stuffer!
Posted by See Brian Write at 7:16 PM

Email ThisBlogThis!Share to TwitterShare to FacebookShare to Pinterest
Labels: Courting the King in Yellow, Writing