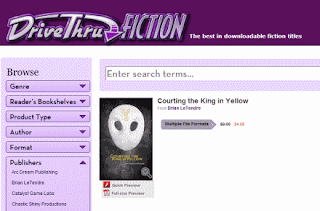 So today I put out the first update for the digital versions of Courting the King in Yellow. The update is really nothing major--fixed a few typos here and there, tweaked the formatting just a bit on the ePub and MOBI versions--but what’s cool about publishing digitally is it’s really easy to update files and then make them available instantaneously.

Being a lifelong gamer, I’m very used to the idea of developers patching their games. In fact, I would say one out of every five times I put a disc in my XBox 360, there’s a title update on whatever game I happen to be playing. On rare occasions though, the patch may fix some things about a game and actually break others, causing more harm than good. Each time you dive back into those digital files, you could screw something up.

Which was the anxiety I was feeling as I finalized the updates for today’s book files. The last thing I want to do is fix a couple typos and then format the book wrong and have it be unreadable on some devices. And the whole ePub thing is very dicey to begin with. While ePub is a widely used eBook format, different eReaders deal the the same file in different ways. I run every ePub file through MagicScroll (a Chrome eReader pugin), Stanza (iOS) and Bluefire Reader (iOS and Android), and they all display the book differently. MagicScroll plays the best with the file, while Bluefire comes in second (some formatting issues with the front matter and some blank pages between chapters) and Stanza is a distant third (reformats much of the book). Now, the book is still very readable on Stanza, but those examples underscore the idea that no matter how good the ePub file is, a lot of how it looks to the reader will depend on the app they're using.

For the record, the MOBI format that Kindle uses seems a lot more stable to me, and the only formatting issue I’ve had with it is that it removes bold font (thankfully, I only used it for a few newspaper headlines in the book).

I have to say, for digital versions, the PDF file is the one that retains the look and formatting of print the best. It’s the format I would recommend reading the book in. But, it’s important to have options. My point is, I don’t take the updates lightly, and I won’t be doing them on a regular basis. If there is a glaring error or something that affects the book on a large scale, I’ll update it. But right now, the latest version I put up today is also the one that’s going to the printer, and I should be getting a proof to review in the next couple of week. The print version will be available before Christmas, for anyone that wants to stuff a loved one’s stocking with the gift of horror.
Posted by See Brian Write at 8:55 PM

Email ThisBlogThis!Share to TwitterShare to FacebookShare to Pinterest
Labels: Courting the King in Yellow