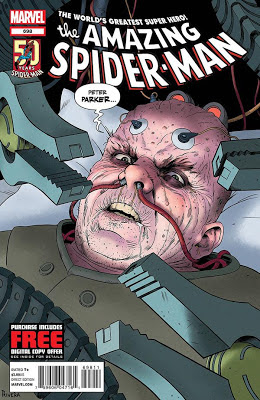 There are no spoilers in this review, and shame on anyone who spoils this issue for someone else.

As I wrote this, Amazing Spider-Man #698 was being released, and readers were finally getting a chance to see what all the hype was about. I waited until a day after the issue came out to post this, because if you picked it up, I didn’t even want to influence your feelings about it.

But I need to talk about it, because man, it’s huge. And I loved it.

I cannot remember having butterflies before reading an issue of Amazing Spider-Man, and that includes the big twist in One More Day (which, whether you loved or hated it, was pretty darn big). I wasn’t scared, mind you--it was nervous excitement. Because for me, Dan Slott has written the characters of Peter Parker and Spider-Man better than anyone who came before him, even his creators. You may think I’m crazy, and that’s your opinion. But for me, Dan Slott is the definitive Spider-Man writer.

So I wasn’t nervous about what might happen to who in the issue, I just wanted Slott to nail it from a story standpoint. And boy, did he.

This moment in the history of Amazing Spider-Man was earned. It wasn’t some cheap twist that didn’t make sense. Sure, there are many questions to be answered in the wake of what happened, but the who and the why is a story that’s been building for over three years and 100 issues. Actually, it’s been building for Peter Parker’s entire life as Spider-Man. But Dan Slott brought it all together, and it’s a thing of beauty.

In the larger scheme of things, we all know that many stories don’t stick--that many changes aren’t lasting. And that’s even truer for the flagship characters like Spider-Man. But I would love to see this one stick. And if it doesn’t, I hope Marvel at least gives Slott time to explore the new landscape he’s created, because the story possibilities are endless.

With ASM #698, Slott cemented his run as the best ever in my book. And I thank him for making the last few years the most fun I’ve ever had reading about the superhero I grew up with.
Posted by See Brian Write at 8:22 AM