Why Clive Barker is My Favorite Modern Horror Author

I had an interesting Twitter conversation with friends last week about Stephen King and Clive Barker. Most of the conversation revolved around a friend who wasn’t very familiar with Barker’s works, and where he should start. I was a little surprised to see that more than a few of my friends weren’t really familiar with Barker, outside of having seen Hellraiser back in the day. Clive Barker has always been my favorite modern horror writer, and Stephen King was the gateway through which I found him.

I grew up reading Stephen King’s short fiction in anthologies like Night Shift and Skeleton Crew. I love the short story format, and King is a master at creating terrifying short stories that stay with you long after you read them. His story “The Boogeyman” from the Night Shift collection is still scary for me to think about to this day. What I loved about King’s short stories is that he was offering you a little peek into different worlds, and you stayed just long enough to whet your appetite before your time there was over. In my mind, he’s very similar to Lovecraft in that way.

It was Stephen King’s longer works that I never really got into, despite several attempts. While I always loved the characters he created in his longer works, I felt like the worlds themselves weren’t as interesting to visit.

In any case, I discovered Clive Barker because Stephen King once referred to him as “the future of horror.” Like King, Barker had also written some collections of short stories, called the Books of Blood. By the time I had finished reading those, I was devouring anything with Clive Barker’s name on it. But it wasn’t until I jumped into his longer works like Weaveworld that I knew he’d become my favorite modern horror author, and one of my favorite authors in general. 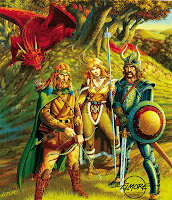 The main reason I gravitate toward Barker as opposed to King (or even Dean Koontz, who I also love) is because of the way he mixes fantasy with horror. As a child, I grew up playing Dungeons & Dragons and reading fantasy novels like Weis and Hickman’s Dragonlance series. The idea that someone could blend those immersive fantasy worlds I spent so much time in with twisted horror never occurred to me until I started reading Clive Barker. He creates worlds that are as interesting as the stories he tells within those worlds.

I think one of Barker’s books that really encapsulates why I love him is The Thief of Always. Published in 1992, The Thief of Always is a great introduction to Clive Barker for those that aren’t familiar with him. The story is described by Barker as a fable, and its intended audience is both children and adults. It follows a ten year old boy named Harvey Swick who is bored with his life. He meets a man who tells him about a special place called Holiday House, where kids can find anything they dream of. Harvey visits Holiday House and finds out that what the man told him is true, but Holiday House is also a place that harbors a great evil, which Harvey must confront.

I won’t spoil any more of the details, except to say the story is an equal mix of the fantastical and the horrific, and a perfect example of what I love about Clive Barker. Kids will find it to be a creepy and entertaining story, while adults will likely want to start checking out more of Barker’s more mature horror stories.

I’ve said before that H.P. Lovecraft is probably my favorite horror author of all time. He, like Clive Barker, created visions of worlds that were so alien that you wondered where his inspiration came from. Clive Barker does that as well, but while Lovecraft’s worlds always created a feeling of dread, Barker always mixes in a healthy dose of wonder, and sometimes, even whimsy. In my mind, that’s what sets him apart from most.
Posted by See Brian Write at 12:37 PM