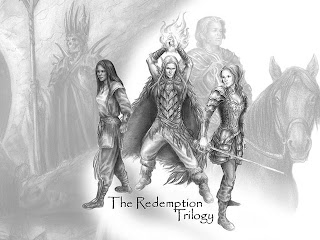 I mentioned in a recent blog post that my good friend Alana Abbott was gearing up for a Kickstarter project, and I’m happy to say she launched it this past week. The project is to fund the release of Regaining Home, the third book in her Redemption trilogy, which began in 2006.

At that time, Alana was writing the trilogy for White Silver Publishing, as it tied into the setting of their fantasy RPG Chronicles of Ramlar, which Alana wrote most of lore for. The first two books, Into the Reach and Departure, made it to print, but White Silver ran into some financial issues, and the third book Regaining Home never saw the light of day.

Alana now has the rights to the series back, and she has brought her original editor (Shawn Merwin) and artist (Lindsay Archer) back on board to properly finish this trilogy.

The rewards for the Kickstarter project range from getting an eBook copy of Regaining Home to naming a character, to having some input into the story itself!

If you pledge at least $9, you’ll get eBook copies of the first two books, and Regaining Home as well. Once you’ve read the first book Into the Reach, download the writer’s commentary style interview I did with Alana about it over on Drive Thru Coimics for free!

Click here to head over to the Kickstarter page and check out all the details!
Posted by See Brian Write at 6:50 PM