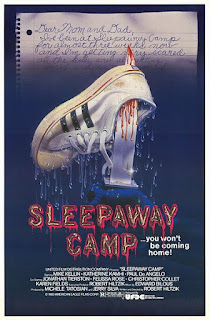 If you’ve read my novel Courting the King in Yellow, or if you’ve ever listened to the Secret Identity podcast, then you know I am a huge horror fan. Specifically, I am a huge 80’s horror fan, of the B-movie variety. Don’t get me wrong, I appreciate quality horror, but I have a special fondness for low-budget horror that has shaped my love of the genre since I was a teenager.

During my middle school and high school years (late 80’s into early 90’s), my best friend and I spent the majority of our free time watching horror films. Our school vacations were filled with movie marathons, and I can confidently say that through about 1995, I had seen almost every horror movie that was released in the US on VHS.

One of the most memorable horror movies I’ve ever seen is the 1983 slasher film Sleepaway Camp. At the time of its release, the Friday the 13th series was in full swing, and Sleepaway Camp was clearly inspired by that franchise. The film revolves around a series of murders that are occurring at a kids’ summer camp, and like the original Friday the 13th, the killer is not revealed until the end of the movie. Despite featuring poor writing and acting, as well as pretty bad special effects, Sleepaway Camp was vaulted into the horror hall of fame by one thing--its ending. The final moments of the film were shocking, and anyone who has ever seen the movie will never forget the final scenes. I remember my best friend and I literally jumping up off the couch and running out of the house screaming and laughing, as we could not believe what we’d just seen.

The reason I’m writing about Sleepaway Camp now, is that in a recent episode of Secret Identity we made a passing reference to it, and one of our listeners watched it for the first time afterward. His reaction was priceless, and he mentioned that the podcast How Did This Get Made? had done a recent episode about the movie. I in turn listened to that episode, and was in tears listening to Paul Scheer an company try to make sense out of it.

So, if you are a fan of horror, and you have not seen Sleepaway Camp, you can now watch the entire movie on YouTube--in fact, you can watch it in the player below. Do yourself a favor and don’t just skip to the end, as the final moments are so much better when you’ve watched the build up.

After you watch Sleepaway Camp, go and check out the How Did This Get Made? episode about the film. Your enjoyment of it will quadruple. The discussion they have about the movie is exactly the type of discussion I have with my pals about horror flicks, and it’s one of the reasons I love the genre so much. Enjoy!
Posted by See Brian Write at 9:42 AM