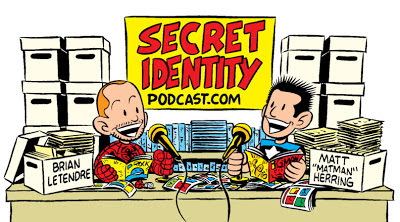 I had intended to sit down and write some profound reflection about the 500th episode of the Secret Identity Podcast and the fact that we are celebrating our seventh anniversary this month (we started in march 2006). But the more I thought about it, the more I realize my memories of the past seven years are a series on snippets, moments and factoids from my experiences with the show. So, I’ve decided to do this as kind of a list of those things that stick out to me, and that people may find interesting. Here goes:

I can honestly say that despite everything else that has gone on in our lives over the past seven years, Secret Identity is something that Matt and I look forward to doing week in and week out. Many times, it has been the highlight of an otherwise difficult week. The fact that people take time to listen to the show every week still amazes us, and we are very thankful to all the folks who have spent time with us over the years. One of the things I am most thankful for is my friendship with Matt, which will always be tied to Secret Identity and the time and effort we've put into this thing we love.