Writing What I Know 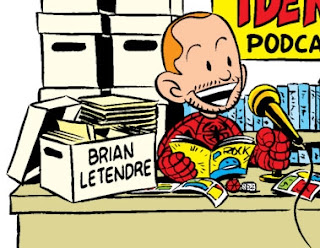 As anyone who's read this blog in the past probably knows, I have been a podcaster for the last seven years. This month is actually the seventh anniversary of the Secret Identity Podcast, a twice-weekly show that I've been recording with my pall Matt Herring since March of 2006. We've produced over 1500 hours of programming, and have posted over 700 shows in all.

In 2010, I began recording and producing lbobi Radio with my good friend Jeff Rodgers of Allison Rodgers Photography. lbobi Radio focuses on design, technology and the creative process. We've posted fifty episodes of that show so far, and have featured interviews with award-winning photographers, entrepreneurs and successful small business owners.

This past year, I spun off a Secret Identity gaming segment into its own full-length podcast, Co-Op Critics. While that podcast is still pretty young, the blog that myself and fellow gamers Kim Wong, Dan Evans and Dave Fetterman have built around the show is thriving.

So why am I talking about podcasting so much? Because I'm going to write a book about it.

Right now, I'm in the outlining process, and there's so much to talk about already. Rather than a technical guide, I want to provide clear and helpful advice on how to go from thinking about starting a podcast to making it happen and developing a presence for it on the web. Don't get me wrong--there will be plenty of info on the process itself, like the tools used to record, edit and publish, but the book isn't going to read like an instruction manual. I'm aiming to provide practical advice to help people chart a clear and cost-effective path to starting and maintaining a podcast.

I'll be talking about this book here on the blog as I move forward, as well as highlighting some of the people I'll be interviewing for the project as well. I may even have some podcasting news to announce....
Posted by See Brian Write at 7:56 AM