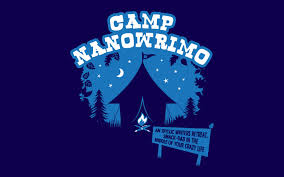 Coming off of a very productive month of writing in March, I decided to take part in Camp NaNoWriMo for the month of April. I had participated and completed National Novel Writing Month twice before (2008 and 2011), but Camp NaNoWriMo is a bit of a different animal.

Basically, the idea behind Camp NaNoWrimo is to keep people writing outside of November each year (NaNoWriMo month). Camp NaNoWriMo is a more flexible version of the yearly novel writing event, and that’s what drew me to it. Instead of a 50,000-word novel being the goal, participants can set their own word counts for the month. So, I set my goal for Camp NaNoWriMo at 15,000 words, keeping in line with the 500-word a day pace I had set for myself last month.

But the coolest aspect of Camp NaNoWriMo isn’t the flexible word count--it’s the concept of “cabins.” Based on your word count goal and your genre, you get matched up with a small group of participants to form a “cabin.” These people are your own personal support group, and you are part of their for the month. It feels more intimate and less intimidating than the regular forums, and it really contributes to the “camp” feel of the event.

Anyway, my project for this month is the book about podcasting that I started at the end of March. If I hit my goal by the end of may, I’ll have a good chunk of the book done. After two days, I’m right on target.

More to come!
Posted by See Brian Write at 3:36 PM