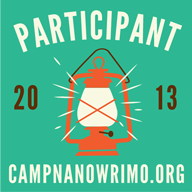 As the month goes on, I’m really enjoying Camp NaNoWriMo more and more. Yesterday, the folks behind the event held a fundraising event called the NaNo Thon. The event was designed to get people writing as much as possible during an eight-hour stretch, while also getting some donations for NaNoWriMo. Over the course of the day, the NaNo folks held some Google Hangouts and talked with different writers, shared stories, and even made up some camp songs to help urge the participants along. It was a lot of fun, and I had the livestreams on in the background while I wrote.

I had a very productive day yesterday, writing over 1600 words, and breaking through the 10,000-work barrier for the month so far. I’m two-thirds of the way to my goal for the month, which puts me ahead of schedule. I’m not slowing down though, as I’ve got a long way to go before the book I’m working on is complete.

Stay tuned!
Posted by See Brian Write at 8:39 AM