Well, my first Camp NaNoWriMo is in the books (no pun intended), and boy did I have a blast. I learned a few thing about myself along the way, which is kind of what camp’s all about, isn’t it?

First off, I learned that I absolutely need to have word count goals in order to be a productive writer. I need them. After establishing a 500-word a day goal in March, and carrying that goal over into April, I can safely say that for this time in my life, I can write 500 words a day. Sure, there will be days when it doesn’t happen, but that should be my goal each day. It’s doable. For the most part, I have the time, and I’ve proven it over the past two months.

Which brings me to the second thing I learned about myself--when I set reasonable goals, I often exceed them. I know, common sense, right? But here's the thing--I could have said I was going to write 1000, 1500 or 2000 words a day instead of 500. And I’m sure there would have been days where I hit that goal. But I would have failed a lot as well, and I would have felt like I was underachienvignt for the month. As it was, I exceeded my 500-word a day goal more than 75% of the time. This led to me feeling like I was overachieving for the past two months, and it kept me wanting to write as much as possible.

Finally, I learned that the closer I get to the finish line of the month, the more I write. In both April and May, my most productive writing blocks were the last third of each month. In April, I went from 6,000 or so words in the first ten days, to 8,000 in the second ten and over 10,000 in the final ten days. There was a point in each month where I knew I would meet my 15,000 word goal, and it spurred me forward to hit the next milestone.

All told, I wrote over 25,000 words in the month of April. Combined with my March total of 16,000, that’s over 40,000 words in two months. I’m ecstatic about that. I finished another short story, got a ton of Mo Stache pages done, and I’m two-thirds of the way through a book about podcasting that I hope to finish in May. In fact, I’ll be carrying my word count goal over into May, and probably beyond. 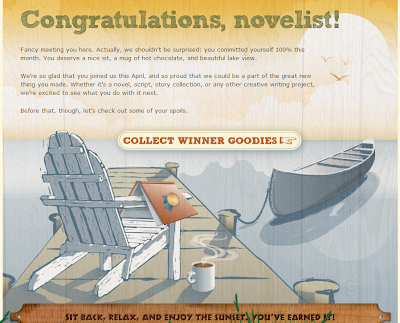