Tragedy in Oklahoma Brings Back Memories of a Close Call 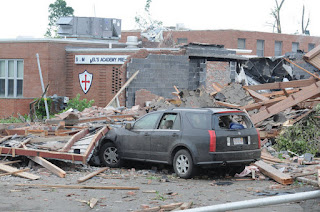 Sometimes, I have to write about things in order to deal with them.

Yesterday, a tornado hit the Oklahoma City area, and one of the places it hit was an elementary school in Moore, a city just south of Oklahoma City. As I write this, search crews are still at the site and some children have been rescued from the rubble, but there have also been casualties. There are no words to describe what the thought of losing a child does to you as a parent. I have not been able to watch the news coverage of that situation, and those families have not left my thoughts for a moment since that tragedy struck.

As human beings, when we see something like this happen, our brains try to correlate what we see with something we’ve experienced, in order to help us make sense of the situation. For me, in this case, there is a correlating incident that has haunted me for almost two years and has profoundly affected my life.

On June 1, 2011, a Wednesday afternoon, I left work a little early to go and pick up my son at his preschool program. The weather was about to get ugly--we had a severe thunderstorm warning at the time, and here had been talk of the conditions being right for a tornado, although everything we had heard at that point indicated the danger zone was east of Springfield, in the Palmer/Ware area.

My son was supposed to a tee ball game that evening, so I was getting him early so he could go home and get ready, and so I could keep an eye on the weather. I picked him up around 4:15, which was about a half hour earlier than usual. I remember talking to the teachers there about how ominous the clouds looked that day, and how we thought his game would almost surely be canceled. On the way back, I picked up my daughter from her elementary school, which is a few blocks from our house. We got home a little before 4:30.

What I did not know at the time, was that a tornado had already touched down in Westfield about ten minutes earlier. By the time I turned on the TV at home, the tornado warning was in effect for the entire area.

Right around 4:30, as I was watching the live weather report on TV, the tornado crossed the Connecticut River into downtown Springfield. I immediately took the kids into the basement, grabbing a flashlight along the way. They were not panicked at this point, but I was freaking out inside, having just seen the tornado on TV and realizing it was just down the street from us. We had only been in the basement a few minutes when the tornado literally came right down the street next to ours and then headed up toward the preschool where I had picked my son up a short time earlier. What I remember about the moments when it passed by was not the sound of the tornado itself, but the deafening silence that followed it.

We stayed in the basement for a while afterward, until I heard some of the neighbors outside. I made the kids stay there until I could poke my head out and make sure everything was in one piece. Our street had been spared, but many others around us were not so lucky.

Cell towers were down in the area, but I knew my wife would be on her way home and would be frantic worrying about us. I figured the worst was over, and my anxiety had just started to recede when a police cruiser came up the street next to us, telling people over his loudspeaker to get off of the streets, as another tornado could be on its way. Back to the basement we went, and I tried to keep the kids calm as I frantically texted my wife to get off the highway, hoping she got the message.

Thankfully, that second tornado didn’t touch down in Springfield, and my wife made it home safely a couple of hours later, which were some of the longest hours of my life.

It wasn’t until we walked around the neighborhood the next day that we realized how lucky we were. My son’s preschool had been caught in the path of the tornado, and the building was severely damaged. We found out that the teachers had gotten all of the remaining students to safety in the basement and no one had been injured. But the thought that my son could have been there had I not picked him up early that day kept me awake for months afterward.

And so, as I dropped my kids off to school this morning, and my son turned to wave to me, I became overwhelmed with emotion. I almost turned around and kept him and his sister out of school for the day, just to easy my own anxiety. I drove away with tears in my eyes, thinking about how those parents in Moore dropped their kids off at school yesterday, and some of them will never get to see their children again. It’s truly heartbreaking.

The events of the last 24 hours are yet another reminder of how our lives can change forever in one second. On June 1, 2011, my life changed forever. There is a sense of urgency to my life that wasn’t there before. There is now a voice in my head that reminds me to appreciate every single day I have on this earth, every day I get to spend with my children and the woman I love. I’m sure they think I’m crazy sometimes, but when you have a close call like we did, your perspective changes forever.

My thoughts and prayers go out to everyone affected by the Oklahoma tornado. As for the rest of us, the least we can do to honor this (or any) tragedy is to never take anything for granted.

Have you told the people you care about how you feel today?
Posted by See Brian Write at 11:26 AM

Email ThisBlogThis!Share to TwitterShare to FacebookShare to Pinterest
Labels: Family