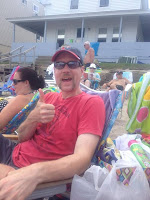 I've been on vacation with the family for the past week, so I haven't been doing a ton of writing. But as always, there is lots going on. Here's a few updates:

The print proof of Making Ear Candy has shipped and is on its way to me! I hope to have it in my hands in the next day or two. Any tweaks I need to make to this first edition will be done this week, and my plan is to have several copies available for ComiCONN at the end of the month. I will also be releasing the digital version at the same time.

I've also gotten feedback and am completing edits on my first short story for Kindle Worlds. It's called Centurion, and it takes place in Valiant Comics' X-O Manowar universe. I'm really excited about this one and it should be available very soon.

A new episode of Secret Identity was posted this week, featuring reviews of Batgirl, Fantastic Four, Six-Gun Gorilla and more.

The third episode of Kitbash Radio also dropped this week, in which Jeff Rodgers and I discuss the making Ear Candy book cover as well as business card design.

Episode #6 of See Brian Write was also posted this week, and featured an interview with author Grant Koeneke as well as my gushing about how awesome Joanna Penn's website is.

I saw The Conjuring while on vacation and wrote up a review for Secret Identity.

And finally, I posted on Co-Op Critics about a fun SEGA light gun game I played at the arcade when I was at the beach with my family.

So, even though I technically wasn't around this week, I still got some things done. More on the book in a few days!
Posted by See Brian Write at 11:15 AM