It's a Double Con Weekend!

This will be a big weekend for me, as I'll be attending two conventions not just as a member of the media, but as a creator as well. For the first time, I will be selling print copies of both Making Ear Candy and Courting the King in Yellow. 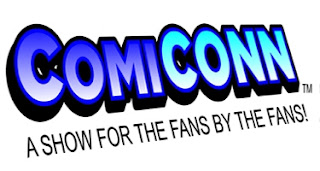 On Saturday, I'll be heading down to Trumbull, CT to see a ton of my comic pals at ComiCONN. Matt and I will have a table for Secret Identity and we'll be doing interviews, hanging out and selling books all day. There are some fantastic guests at this show, including our pal Chris Giarrusso and comic legends J.M. De Matteis, Jerry Ordway, Tom DeFalco and many more. You can find out more about the show at www.comiconn.com.

On Sunday, I am very excited to be taking part in the first annual Bing Con, a Springfield-based show that is not only celebrating local creators, but is helping support something great. The Bing Theater is an old theater smack dab in the middle of my neighborhood that used to be a staple of the community. It fell into disrepair over the years and was eventually taken over by the city, seemingly doomed to languish forever. A few years ago though, a non-profit group came together to buy the theater and bring it back to its former glory. The work has been ongoing for years, and a good portion of the theater has been restored, enough so that local events are now being held there. Bing Con is the first comic show to be held at the Bing, and I couldn't be happier to be a part of it. You can find out more about the show on its official Facebook page. I'll be there from 11-5 on Sunday with Matt as well. 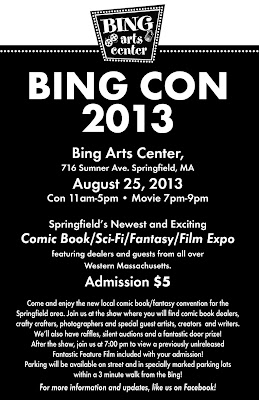 So, if you're in the Trumbull area on Saturday, or Springfield on Sunday, come out to a great show and say hi. I'd love to talk comics, podcasts, or anything else with you!
Posted by See Brian Write at 6:58 AM