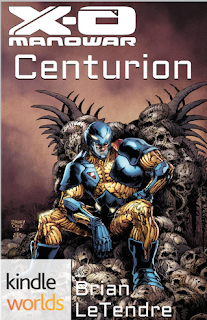 You may remember me getting really excited about the new Kindle Worlds platform a while back, especially once Valiant Comics joined the program. My Camp NaNoWriMo project for July was to write a story for Valiant's X-O Manowar property, and I am very happy to say that the story is now available on the Amazon!

The story is called Centurion, and you can grab it for $1.99 here.

After being captured and enslaved by the alien race known as the Vine, Aric of Dacia stole their most powerful weapon and used it against them. Donning the X-O Manowar armor, Aric took the fight to the Vine on their homeworld of Loam and defeated them, freeing what was left of his people in the process.

Now, as Aric tries to forge a new life for his people, he learns that the Vine have a weapon of their own--someone from Aric's past who now conspires with the Vine to get the Manowar armor back and destroy what is left of the Visigoth people. As Aric comes face to face with his past, the future of his people is in jeopardy.

Centurion is a standalone story that takes place between issues #14 and #15 of the current X-O Manowar comic series.