DriveThru Fiction is a Better Match for Me than Kindle MatchBook 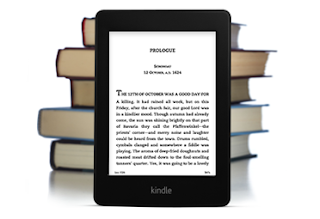 At first glance, Amazon’s new Kindle MatchBook program was something I had been waiting for since publishing my first novel in October of 2012. The new program would allow me to offer print versions of my books through CreateSpace, and offer the kindle versions of the same books at a lower price point for those who bought them in print.

Over on DriveThru Fiction, I had that option from the day I published my first book--it’s built right into the setup process for new books at DriveThru. For example, when someone purchases the print version of Making Ear Candy over at DriveThru for $11.99, they can grab the digital version (ePub, Mobi, or PDF) for a mere two dollars more, a discount of five dollars (the digital version is usually $6.99). I really don’t make any money off the digital version with that bundle, but I’m happy to offer a good deal to someone who’s buying my book already.

Anyway, the reason I’m able to offer both the print book and the bundle at a decent price is because DriveThru does a really awesome job of keeping setup and manufacturing costs down. They also let me set the price and the profit margin, so I can keep the cost as low as possible while making a few bucks on each purchase.

So like I said, I was very excited to have the opportunity to offer the same kind of print and digital bundles through CreateSpace and Amazon. I went about setting up the print version through CreateSpace (the digital version is already on the Kindle store), and everything was going as planned until I got to pricing.

CreateSpace has a little thing they call the “Minimum Price Threshold.” That’s the price your book has to be at or above to sell through CreateSpace. According to them, this price is based on manufacturing and distribution costs. Since Making Ear Candy has some color images in the interior, it costs more to print.

For Making Ear Candy, the “Minimum Price Threshold’ was $16.82. That’s the lowest price I could offer the print version of my book for, and at that price, I would make absolutely nothing on a sale if someone bought that book through Amazon. To make three bucks a sale, I would need to price the book at $20, and even if I gave the Kindle version away for free, that bundle would still be seven dollars more than the $13.99 bundle I could offer over at DriveThru. That means I would make less money on the bundle, even though the customer was paying substantially more.

Folks, that just doesn’t make sense to me.

And yes, I know that from a distribution standpoint, Amazon and CreateSpace have a much wider reach and a much bigger base than DriveThru. But I don’t feel comfortable screwing potential readers with a pricing structure that benefits neither one of us.

So, while I’ll be continuing to make digital versions of my books available on Amazon and DriveThru, I will be sticking with DriveThru for print. If the gap between the two in terms of print costs gets better, I'll reconsider in the future, but it doesn't look like Kindle MatchBook is a match for me right now.
Posted by See Brian Write at 11:21 AM