Jolene Haley of the wonderful writers' site Pen & Muse has put together one heck of an awesome horror event to celebrate the month of October. It's called Dark Carnival, and it's a showcase of short horror stories featuring dozens of writers and artists, each of whom will be crafting their horror short around a carnival ride or attraction.

As a die hard horror fan, I could not sign up for this event fast enough. I based my short story around the "Old Tyme Photo Booth," as i have fond memories of both the one at the Big E (seen below) and the one at Hampton Beach in New Hampshire. 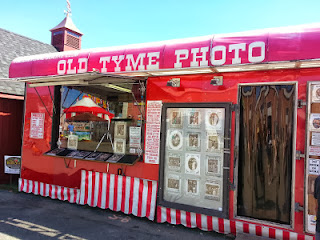 I actually had a couple of ideas I was kicking around, but one of them proved to be too elaborate to be crammed into a short story (this particular project is between 1,000 and 4,000 words). I knew I wanted to play with the idea of something from the past coming back to haunt the present. I won't spoil what I ended up writing about, but after my story goes up I'll blog a bit about it.

So, Dark Carnival officially starts tomorrow, and you can read the stories as they get posted at the landing page for the project (or by clicking the banner at the top of this post). I'm not sure exactly when mine is going up, but the event will be going on for the month of October, and new content will get posted every Friday. If you're a horror fan, then you're in for a treat, as you'll get to read dozens of horror stories for free. What a great way to celebrate the month of horror!
Posted by See Brian Write at 9:28 AM