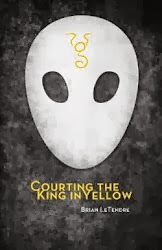 To celebrate the upcoming release of Lovecraft's Curse, I've dropped the price of my debut horror novel Courting the King in Yellow to $0.99!

At Amazon you can grab the Kindle version, and Drive Thru Fiction has three digital versions, so you can read on whatever platform you want!
If you're interested in the print version of CtKiY, you can grab that over at Drive Thru Fiction for $9.99, as well as get the digital versions for a mere $0.49 more!
To whet your appetite, here's the back cover copy:

When Melotte Pharmaceutical moved into the struggling city of Springfield, residents saw it as a godsend. But while the city’s fortunes appear to be turning around, something sinister is brewing within its homeless population.

Four newfound friends stumble onto a horrific plan for the city, and their lives will never be the same again. Because on Halloween night, a new horror will be coming to Springfield, and they are the only ones who can stop it.

And here's a quick teaser trailer I made for the book:

Email ThisBlogThis!Share to TwitterShare to FacebookShare to Pinterest
Labels: Courting the King in Yellow, Horror, Writing