So, NaNoWriMo 2013 ended last night at midnight, and I finished the month with just over 60,000 words written, a personal best for me. This is the third time I've completed NaNoWriMo (2007 and 2011 being the previous ones), but it was the first time that my draft wasn't complete at the end of the month.

If I had to estimate, I'd say Lovecraft's Pupil is about 85% done at this point. there are at least three major scenes that I still need to write, and there will be no days off from writing until this draft is finished. There's no way I'll be losing the incredible amount of momentum I've built up writing almost 2,000 words a day for the past thirty days.

So, as I march onward into December, I want to congratulate every single person who participated in NaNoWriMo this year. Whatever your word count at the end of the month, you took part in something special.

Now you need to build on what you've created. So, take a nap, let your draft sit for the next month or so, and then get back at it! 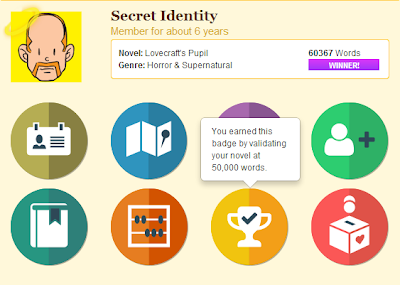