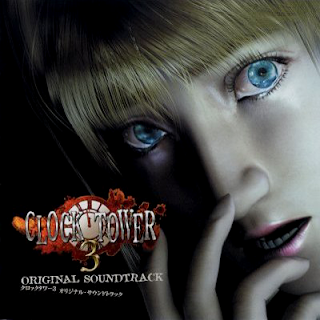 When I write, I need some sort of background noise, and music is my background noise of choice. For the most part, I prefer instrumental music, as I tend to get distracted by words (although I do mix in a healthy dose of 80's metal).

I've found that video game soundtracks have become my music of choice, especially over the past month, as I've been writing daily for NaNoWriMo. So, I figured I'd start posting about some of the music I've been listening to as I write, starting with one that I just kind of stumbled upon, but really like--the soundtrack to Clock Tower 3.

For those not familiar, the Clock Tower series is a survival horror series that began in 1995 (I first played the original on the PlayStation). As opposed to the more action-based horror games of today, Clock Tower was primarily about avoiding enemies that were much more powerful than you, while solving puzzles and exploring.

While Clock Tower 3 deviated a little from the series formula, the soundtrack certainly captures the feel of the series. Most of the songs on the album are short, and many of them have a panicked feel to them that you would associate with being pursued. Others range from foreboding to very sad, and feature some great strings, piano and percussion. As a total package, it's very atmospheric.

As a writer of horror, I really like using this soundtrack to fuel some of the scarier scenes, or those where there is a race against the clock. Fun, creepy stuff.
Posted by See Brian Write at 3:46 PM