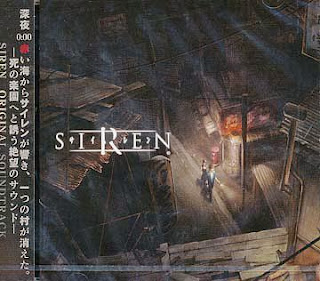 I talked a bit in my last post about how video game soundtracks are becoming a big part of my writing playlists. I’ve been working on the sequel to Lovecraft’s Curse for the past month and a half, so I’ve been favoring horror-themed soundtracks as my background music. One super-creepy album that has gotten me through writing scary scenes is 2008’s soundtrack for the horror game Siren.

Siren was a 2004 PlayStation 2 survival horror game set in a small Japanese village where an attempt to resurrect an ancient god turns many of the villagers into walking corpses, who are hunting down the remaining survivors as they await their god’s return. Despite having pretty bad mechanics, the game was scary, due in no small part to the fantastic soundtrack.

Hitomi Shimizu and Gary Ashiya created a score for Siren that is dripping with dread. Lots of ambient sound that fades in and out, chanting voices and well-placed sound effects create a constant sense of tension that is occasionally punctuated by outright terror. It’s a fantastic soundtrack to write horror to, especially is what you’re writing deals with rituals, the occult or just cosmic weirdness.

You can import the soundtrack for Siren from Japan here, and if you want to read more about the Siren music, Hitomi Shimizu was interviewed by Silicon Era a few years ago, when Siren: Blood Curse was coming out for PlayStation 3.
Posted by See Brian Write at 12:13 PM